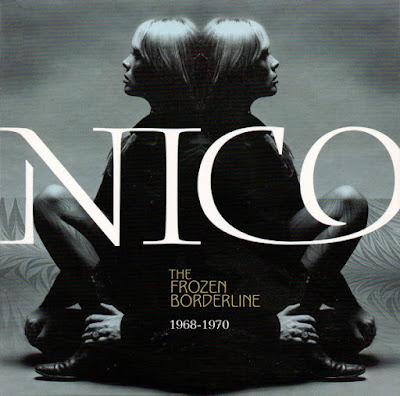 Disc Two, tracks 1 to 8 originally issued as Desertshore, Reprise (US) 6424, 1970.
Disc Two, tracks 9 to 14 are demos, recorded August 20, 1969 and are previously unreleased.
Abschied and Mütterlein are from the film La Cicatrice Intérieure, directed by Philippe Garrel.
Disc Two, track 15 Frozen Warnings (with John Cale on drone viola) is an unlisted hidden track.


Four decades after its release, Nico's first solo album Chelsea Girls remains her most famous. Its bittersweet folk-pop has continually grown in stature, even hitting a pop culture peak a few years ago when "These Days" showed up repeatedly in commercials and films. Less well-known is how much Nico despised the album. The lithe melodies (written by ex-boyfriends Jackson Browne, Bob Dylan, and Lou Reed, among others) and ornate string arrangements struck an irresistible contrast to her chilly vocals. But to Nico they were the antithesis of her own artistic core.

Her next two albums, 1969's The Marble Index and 1970's Desertshore, are more accurate representations of her dark, dramatic vision. They may not have achieved the renown of Chelsea Girls, but they've held up just as well, if not better, artistically. The Frozen Borderline: 1968-1970 is a UK-only deluxe combination of both albums, appending 18 alternate versions to the pair's original 16 songs.

After Chelsea Girls, apparently on the suggestion of Leonard Cohen, Nico took up the harmonium, an accordion sibling that's usually foot-operated. But Nico played a portable, hand-operated Indian version, and the instrument's droning tone was an apt counterpart to her obliquely tragic songs. Spending four days in an Elektra studio in L.A., she recorded 12 pieces with John Cale, who wrapped a rich pastiche of viola, piano, guitar, and more around Nico's harmonium and vocals.

The result is a strange, moving album that Lester Bangs called in a 1978 review "the greatest piece of 'avant-garde classical' 'serious' music of the last half of the 20th century so far." He also said it scared the shit out of him. There is certainly an underlying bleakness that can make The Marble Index a strenuous listen. But Nico's melodies are so hypnotic, and Cale's sonics are so fertile and unpredictable, that it's hard not to be entranced by these songs.

Sure, Nico's cryptic lyrics about "the end of time," "the heaving sea," and "frozen warnings" sound grim, but her Teutonic croon could've made commercial jingles seem foreboding. For every sad line or aching refrain, there's the touching beauty of "Ari's Song", the rising viola of the pristine "Frozen Warnings", the pulsating piano of "Facing The Wind". The Marble Index may seem to strike only one note, but inside it Nico and Cale found a universe of possibilities.

The original release of The Marble Index included eight of the 12 songs Nico recorded for it. The Frozen Borderline adds the other four, plus alternate versions of every track save the opening instrumental "Prelude". Some of these alternates are different mixes of Cale's contributions, but the most interesting present Nico alone with just her harmonium. The sparser setting gives the songs a sunnier feel, transforming the stirring "No One Is There" and the reflective "Julius Caesar (Memento Hodie)" from maudlin to bittersweet.

The Marble Index's lackluster sales led Elektra to drop Nico, but in 1970 Reprise picked her up, and she and Cale teamed again to make Deserstshore, included here on disc two. Many prefer it to The Marble Index for its sonic variety and wider range of moods, and it definitely sounds more open and less claustrophobic than its predecessor. But the album has too many soft and even saccharine moments to be perfect. The sappy melody of "Afraid" and the tinkly ice-dancer piano of "The Falconer" aren't crimes in and of themselves, but they keep Desertshore from matching the intense purity of The Marble Index.

Still, there are a lot of great songs here, and Nico's voice remains unerring, perhaps even stronger than before. On opener "Janitor of Lunacy" a slight strain in her voice adds urgency, while the German lyrics of "Abscheid" slice through Cale's viola like an icicle puncturing a snowdrift. And nothing quite compares to the creepy "Le Petit Chevalier", a nursery rhyme sung by Nico's eight-year-old son Ari.

The extra tracks on this disc are mostly harmonium-and-voice versions of the album's originals, and in many cases they sound better. "Afraid" becomes the haunting "You Are Beautiful (Afraid)", more like an elegy than the original's soft ballad, and the droning "The Falconer" is stranger and darker than its more ornate counterpart. It's perhaps sacrilege to prefer these sparser versions, and the Desertshore originals certainly offer more sonically. But Nico's solo takes are welcome breaths of fresh, uncomplicated air.

The Frozen Borderline ends with a hidden version of "Frozen Warnings", Nico's signature song from this period. Here, the arrangement is pared down to just Nico's voice and Cale's viola. Its stoic beauty is a perfect synopsis of this great period and just might represent the peak of both of these artists' stellar careers. Either way, The Frozen Borderline is an essential document of a high watermark in avant-rock history.
Posted by Zen Archer at 1:19:00 AM