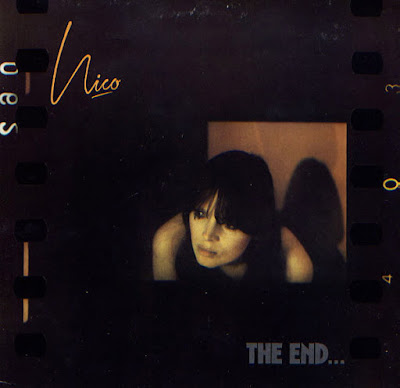 Nico's fourth solo album, 1974's The End, is the closing part in a disturbing, avant-garde trilogy of records produced by John Cale and marked the end of Nico's recording career for some seven years.

Following on from the medieval Gothic-inspired The Marble Index and Desertshore albums, The End has its foundations in Nico's wheezing, off-kilter harmonium, doom-laden lyrics, and deep, brooding, European vocal style. But here the music is slightly fuller and perhaps less sparse - yet no less icy or menacing - with the introduction of experimentalists Brian Eno (synthesisers) and Phil Manzanera (guitar) to the intimidating mix.

Dour, melancholic, and often quite uninviting, The End is however strangely compelling and unexpectedly memorable. Nico's merits as a songwriter were sometimes questioned, and her vocal attributes maligned through her participation with The Velvet Underground but her Cale-helmed solo albums proved her unique and original artistic worth.

Despite the introduction of synthesisers and guitars to the core medieval sound Nico and Cale had created with the two previous albums, The End doesn't sound particularly of its time - all of Nico's music is oddly timeless and eerie. Nico's voice dives and soars and is perhaps even surprisingly strong or dextrous on some songs.

"It Has Not Taken Long" opens proceedings typically eerily, with a zombie-like choral line. "Secret Side" offers a more melodically optimistic slant on Nico's trademark style, while the stark "We've Got the Gold" finds the music taking a more experimental art-rock turn. Much of the album is typified by unexpected twists and turns within Nico's core sound.

For example, Eno's screeching, violent synthesiser effects create a highly disconcerting atmosphere on "Innocent and Vain," while "Valley of the Kings" finds Nico's voice taking off to unexpected heights and swoops, like a vulture. If possible, she reaches new depths of doom and despair on the harrowing, lonely "You Forget to Answer," supposedly about her relationship with Jim Morrison.

Nico's take on The Doors' "The End" is harrowing, difficult, and challenging, an epic that bursts unexpectedly into a rock-inspired coda, a style she would explore in greater detail on her next album, 1981's Drama of Exile. If there could be a more different cover version offered, Nico, a master of unpredictability, would surely have taken it. But the German national anthem "Das Lied Der Deutschen," complete with banned verses, ends the album on a controversial note with Nico's black humour gloriously intact. It's at odds perhaps with the rest of the album, but maybe that was the Moon Goddess' intention.

Just like the mysterious and enigmatic characters and worlds that orbited her doom-laden, disturbing world, Nico was an unpredictable and often unreadable woman. She drifted in and out of the music world and it is telling that each of her studio albums were issued on different record labels. She never found a mainstream audience, not surprisingly, but those who have heard her odd, strange, unique work are often polarised in opinion. There is no good introduction to Nico's music, simply because none of her albums are safe or reliable. The songs are timeless and don't seem to belong to any real era, which is a testament to Nico's songwriting power and artistic stature. The End is the last of Nico's unremitting dark, claustrophobic, insular works (although she hardly lightened up with subsequent albums) and is a worthy end to her stunning experimental dark avant-garde trilogy of albums of the late 1960s and early 1970s.
Posted by Zen Archer at 11:27:00 PM