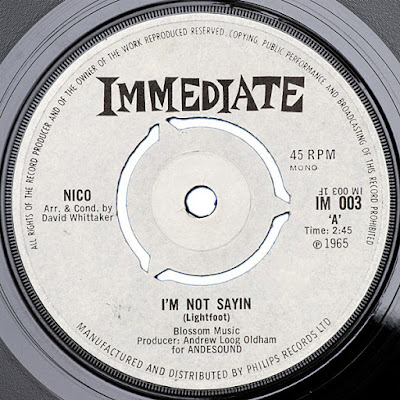 Produced and Arranged by Jimmy Page

Christa Paffgen was a German model who renamed herself Nico and had a supporting role in Federico Fellini’s masterpiece of decadent pop society, La Dolce Vita. She met Dylan in Paris in the spring of 1964. He had sung the praises of La Dolce Vita’s Anita Ekberg in “I Shall Be Free No. 10” and was no doubt happy to meet another starlet from the film. Nico accompanied him to Germany and Athens while he wrote much of his fourth album, Another Side of Bob Dylan. The track “Motorpsycho Nitemare” features a woman who looks like she stepped out of La Dolce Vita. Nico later claimed Dylan wrote “I’ll Keep It with Mine” for her, but then again, both Joan Baez and Judy Collins claimed that, too.

A year later, Nico hooked up with the Rolling Stones’ Brian Jones. The Stones’ manager, Andrew Oldham, took her on as a client and decided to give her the same treatment that had launched Marianne Faithfull’s career. In late May he produced her cover of folk singer Gordon Lightfoot’s “I’m Not Sayin’,” with Jones and Jimmy Page on guitar. Oldham and Page wrote the atmospheric B side “The Last Mile,” which mourns lost childhood like the singles by Oldham’s other chanteuses Faithfull and
Vashti.

That month, when Nico was in Paris, she met Andy Warhol, Edie Sedgwick, and Warhol’s assistant, Gerard Malanga, at the nightclub Chez Castel, where What’s New, Pussycat? had been filmed. The film’s stars, Peter Sellers, Woody Allen, and Ursula Andress were hanging out that night as well. Malanga gave Nico the number of the Factory and told her to visit the next time she was in New York.

Around that time, Dylan’s (and Lightfoot’s) manager, Albert Grossman, heard Nico’s single, along with a demo she’d made with Dylan, singing “I’ll Keep It with Mine,” and offered to manage her if she came to the States. So she flew to New York and went to the Factory with Brian Jones. Morrissey thought she was “the most beautiful creature that ever lived.” He and Warhol wanted to use her in movies and maybe something musical — and by years end she had joined the Velvet Underground. 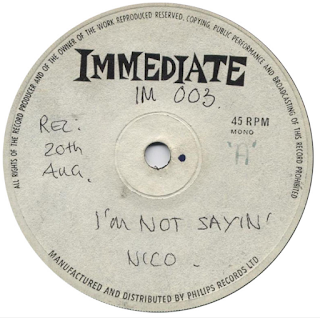 The first, & maybe last time Nico would take a shot at doing a commercial am-radio type record.  Not very interesting, but a real novelty because it's so out of character with the rest of her work (Gordon Lightfoot?...you've got to be kidding!). 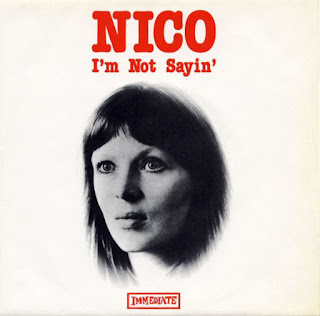 
On the a-side, Nico's voice is in good form on this well-produced folk-pop song written by Gordon Lightfoot. I don't know how much Jimmy Page had to do with the arrangements as the producer here, but it's a little more lushly arranged than Lightfoot's own version, giving it more of a sunshine pop feel which may surprise those familiar with her later work.

The b-side co-written by Page and Andrew Loog Oldham isn't radically different, but it is a bit more raw and dark with just her voice and that blurry sounding 12-string acoustic guitar that helps muddy up some of the early Stones records (played by Brian Jones here). It offers a slight glimpse into where Nico would be in a year's time. And that is usually the main point of interest about this single, but it's a good period piece on its own merits as well. 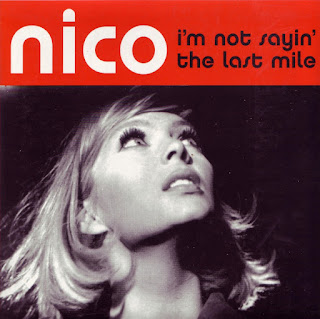 Basically had Dusty Springfield or Petula Clark issued the exact 2 songs on a 45, it would have been in the British Top Ten. Nico on the other hand took Gordon Lightfoot's I'M NOT SAYING and turned it into a gothic funeral torchsong. Somber, sad and demonic. With the help of young Jimmy Page and Brian Jones on acoustic Guitars, Nico proved that she did not need men, but secretly she did. This is the single that Andy Warhol brought into The Factory to play for everyone proclaiming he would be bringing her in to meet the Velvet Underground.
The rest is "one album history".
Posted by Zen Archer at 4:07:00 PM