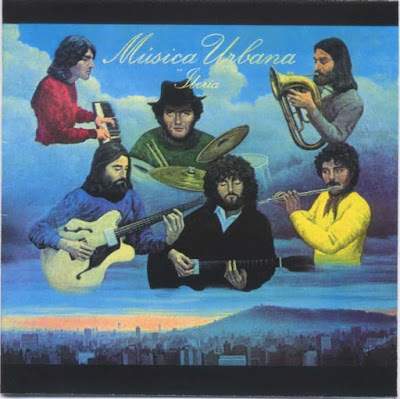 By the time of this 2nd album guitarist 'Luigi' Cabanach had left the band and was replaced by Jordi Bonell, and they got re-inforced by Jaume Cortadellas playing assorted flutes and Matthew Simon playing trumpets, flugelhorn and onoboe.

All the compositions are again by band leader Joan Albert Amargós with one track co- written with bassist Carles Benavent.

The opening 'En Buenas Manos' (In Good Hands) is the track co-written with Benavent (and curiously dedicated to Benavent himself) and features monster fretless bass showing why Benavent was sometimes called 'the Spanish Pastorius' and multi-layered winds contributing to the melodies. It is the most purely electric Jazz-Rock track in the album.

'Invitation au 'xiulet'' (dedicated to German contemporary composer Paul Hindemith) starts as Jazz-Rock but soon reveals the Contemporary Classical music elements and the middle section makes us feel like we are in a broadway musical with complex and deep arrangements.

''Pasacalle' de Nit' (Pasacalle is a lively style of traditional Spanish music which was also explored by foreign composers such as Salieri, Brahms or Stravinski) is dedicated to Stravinski and is the shortest track at 3m09s, featuring mandolin by Benavent, as from here the music becomes more obviously Classical and less Jazz-Rock.

'Pasodoble Balear' (dedicated to Spanish Classical composer Manuel De Falla) is again rooted in Traditional Spanish music (Pasodoble being another traditional Spanish music style) but arranged in a Prog-Jazz-Rock fashion. The abundant brass gives sometimes a big-band feel, we have also a pure Jazz section, but there are so many twists and turns in the style that any attempt to classify this music becomes doomed. Simply brilliant is the only thing I can say.

'Vacances Perdudes' (Lost Vacation) is the longest track at 12m09s and is again an amazing amalgam of styles, Contemporary Classical music and film music elements abound, but in the middle and final sections we get again energetic Jazz-Rock stuff with amazing bass work by Benavent, the track is full of constant changes and yet it manages to maintain a sense of coherent unity. Music composition and performance at its best, these guys were really one of a kind.

Those wanting their Prog to have a clear link to Rock may have trouble with this band and this album in particular, but if you are a Fusion lover or an open-minded progger able to appreciate Classically oriented composition, you have to listen to this band (both their albums), they are trully outstanding.