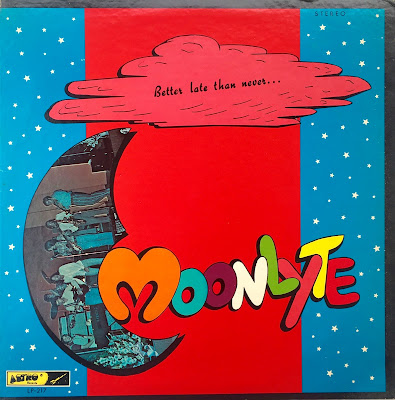 Also Known As:
The Moonlytes, The Moonlights, Los Moonlights

The band had traditional instruments (guitar, bass, drums, organ) plus horn section and latin percussion. On their album, Better Late Than Never released in 1974, they recorded Spanish Boleros (ballads) as well as rock which at the time was very funky

Talent oozes from this group.  Sounds of Santana, Chicago, Pink Floyd, et. al on side 1 and last song of side 2.  Spanish ballads on the rest of side 2.  Horn section (sax, trumpet) is superb, strings (fuzz/wahwah) as well as keyboard (Hammond sound) are "out-a-site", percussion blends in gracefully.  Band is composed of Cuban musicians from North Hudson County (Union City, West New York) in New Jersey, who attended high schools such as Union Hill High School and Emerson High School in Union City, New Jersey. They played many gigs over a 6 year period throughout Norther Jersey (1969 through 1974).
There's a Facebook page (see Fans of Moonlyte or just search for Moonlyte ) where two of it's original members can be seen and a ton of pictures and newspaper clips.

Funk oddity that has power to put a smile on faces for Santana lovers with a few songs in it, there are some nice moments and overall a good atmosphere, makes this album need to be remembered
Posted by Zen Archer at 2:28:00 AM