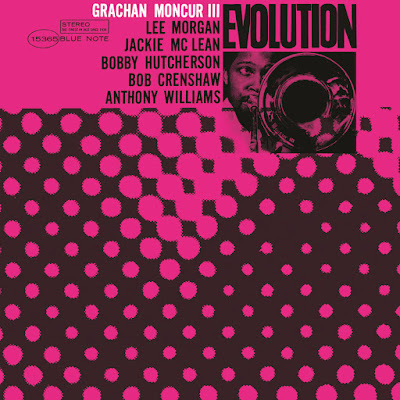 In the post-bop explosion of the early 60s, Blue Note was the home of countless innovations. With Andrew Hill, Eric Dolphy, Jackie McLean, Sam Rivers and company, Blue Note boasted one of the finest lineups in music short of only the San Fran psych scene. Musicians on the label seemed to be pushing music in drastically new directions, warping the idiom of popular music right to the brink of free jazz. Not nearly as fiery or intense as their free jazz contemporaries however, these post-bop musicians instead pushed the boundaries in other ways. Post-bop albums are in a way catchy and melodic - retaining many of the ideas that made earlier jazz movements so engaging. Yet, they include many of the bombastic, radical elements that make the free jazz movement so fascinating. Abstract passages, weird tones, lengthy soloing and unusual instrumentation are not an uncommon sight in post-bop. The beauty of post-bop musicians, as you might imagine, is the ability to balance forward-thinking elements while still remaining indebted to their bebop base.

One of the finest, most original albums to come out of this movement is Grachan Moncur's Evolution. Centered around a brooding atmosphere and abstract melodies, Evolution is equal parts innovative, captivating and eccentric. Most jazz fans will recognize the album's lineup as absolutely jam-packed, with critically acclaimed members abound. Each member on Evolution, save Cranshaw (exclusively a studio musician) has a classic under his belt and the way this album is executed - it's obvious. Each musician brings in hints of their genius to the collective whole. Yet the beauty of Evolution is that despite this stellar lineup, it feels utterly unique and ground-breaking. Despite drawing off classics like Dialogue and Destination Out - Evolution feels nothing like them.

Evolution is so distinct in fact - I'd argue it's somewhat of a blueprint for Eric Dolphy's later masterpiece Out to Lunch. . The rhythm section is the same, with Tony Williams and Bobby Hutcherson proving quite the dynamic duo. Though Out to Lunch may come off as more free-flowing and playful, it still builds off many of the ideas established on Evolution. A similar atmosphere and avant-garde approach permeates Evolution and the rhythmic base of Tony Williams/Bobby Hutcherson grounds the album in a similar bluesy, abstract space). The two obviously built chemistry over the course of a number of similar albums (One Step Beyond being a notable example) and Evolution is a prime example of their amazing interplay. In other words, if you took Out To Lunch and revolved it around horns instead of Dolphy's unusual instrumentation and threw in some spacey, ambient fusion-era Miles - Evolution would be the result.

Surprisingly, the first artist you notice on Evolution isn't Grachan Moncur. It isn't that shocking to hear a trombone leading the charge, even if it is a little uncommon. It is however, pretty shocking to hear what Tony Williams can do on the drums. Talk all you want about Clyde Stubblefield, John Bonham, Keith Moon, Neil Peart, or otherwise - 9/10 times I take Williams. Aside from maybe Jaki Liebezeit, whose rhythmic pulses on Can's studio albums are still mind-boggling as ever - Williams is the most inventive drummer I can think of.

Williams' drumming style is unlike anything I've ever heard and continues to be something I can't wrap my head around. On Evolution especially, his style is onomatopoeic. He kshu-kshu-kshu-es on the cymbals and swings around the drum set with a baaruuhm-psht-psht-gugugu-pow. For often Brrrtt-tap-brrrtt-tap-brrrtt-tap-s on the hi-hats... He even strings together some passages I couldn't describe with vocals. In other words, Williams' style is puzzling and unpredictable. It's constantly on the edge, teetering and filled with contradictions. As soon as I think I figure out which direction he's heading, he veers quickly in the opposite. Some rhythms I can't piece together logically and some I'm convinced are just nonsensical space eaters. In other words, Tony Williams constantly challenges me to revaluate my thoughts on drumming. He has one of his finest showings on Evolution and it's something truly remarkable.

Though Williams may be Evolution's standout, the album's biggest accomplishments is challenging and pushing Lee Morgan. More known for his upbeat bebop hits, he's shockingly abstract and innovative on Evolution. Instead of exploding into free-wheeling, rapid-fire solos, he's contained. On "Evolution", he sputters, putters and tinkers around for a few minutes, keeping himself grounded. Instead of romping his way through blues scales and accelerating up to high-pitched squeals, he's slow paced and thoughtful. He gradually works his way up to a brief crescendo, only to tone it down and circle his way back to the beginning. But this time, there isn't a catchy head or melody to return to - but a series of sharp, jagged riffs. I can almost picture him in the studio, halfway through the solo, bracing himself for a catchy refrain, leaned back in almost Miles Davis-esque pose - only to stop himself and return to the composition.

In a sense, Morgan comes off as the kid in a room full of grown-ups. He's usually just there to have a good time and party but when things get serious on this album, he's reminding everyone of his skills. As a result, he still returns to old habits - being the only soloist that reaches explosive peaks. But compared to his usual approach, Morgan is restrained on his solos, yet experimental with his melodies. In my eyes, part of the charm of this album is hearing Morgan in this middle ground. Contrasted with the reedy, semi-grating style of Jackie McLean and the awkward tones of Moncur, Morgan is the glue that reminds you, "we're here to innovate but also have some fun".

Though Morgan may be the "glue guy" on Evolution, the underrated piece is Bob Cranshaw. On "Air Raid" he really leads the charge, driving the track's direction. There's moments when he absolutely shifts the tone of the track, sliding down the neck of the bass and absolutely dropping the track to the floor. He takes the track to an utter standstill, with his slapping strings serving as a jolting transition from the earlier passages. An aviation-themed track, "Air Raid" relies on quick dives and rapid ascents - and Cranshaw is the man to do it. I'll admit that I'm usually bad at picking up on the technique bass players use on albums (especially with lineups this massive) but this is one of those moments when I could tell Cranshaw drove the whole track. He reminds me a lot of Richard Davis, who I might add has a similar impact on Out to Lunch. The rest of the album, he sticks to mostly bop-based techniques but he keeps the tracks oddly bouncy and rolls them right along.

As a whole, Evolution is a stone cold classic in my book because of its innovative techniques, oddly catchy melodies and incredibly unique atmosphere. After months of searching, I've still only managed to find a handful of albums with a similarly intriguing ambiance. Even then, the albums are mostly some combination of Evolution's lineup.  This band truly had something special. Evolution is an album you should absolutely check out if you want to get a sense of Blue Note's talent in the 60s. An essential for any jazz fan.

Originally released in 1963, Evolution was the leader debut of trombonist and composer Grachan Moncur III, who had previously worked with tenor saxophonist Benny Golson's Jazztet, and was the regular "cool" foil for brimming-hot Jackie McLean in the alto saxophonist's quintet. Moncur was characterized by critics of the day as a player with measured intellectual calm, in heady contrast to the slushy tailgate of Roswell Rudd. Moncur's phrasing is comparatively deft, a bugle-flick that's easily aligned with post-J.J. players like Curtis Fuller. It's probably no coincidence that Evolution's cover art recalls a slightly earlier Reid Miles/Francis Wolff sleeve design, the purple hue of Curtis Fuller Volume 3 (Blue Note 1583, 1958).

To those familiar with the trombonist's other collaborations with McLean from the period—Destination Out! (Blue Note, 1963) and One Step Beyond (Blue Note, 1963)—the lineup here might not be too surprising. Vibraphonist Bobby Hutcherson lends his glassy strike to the proceedings, while a seventeen-year-old Tony Williams is the drummer and Bob Cranshaw is featured on bass. The ringer is trumpeter Lee Morgan, making his only appearance with Williams on record and certainly the most vanguard recording session in his book (apparently Moncur's original choice for brass foil was Prestige recording artist Webster Young). There are four pieces here, all of which come from the trombonist's pen.

Moncur's compositions, especially from this period, tow a line between near-stasis and jaunty modal climbs; such pieces as "Ghost Town" and "Love and Hate" (from his dates with McLean) are tense, meditative tone-poems, imagist and evocative yet with a delicate swing. It is in more abstract, free-flowing canvases such as "The Intellect" from 1965 that wavering stasis has reached its pan-tempo conclusion.

Evolution's title track is a step in this direction, long tones set into bedrock by alto, trombone and bass, with a heartbeat-pulse in single brass and vibraphone notes. With an exhalation, these tones are punctuated by snare rattle and spiraling, uncoiled solo statements. McLean expounds with tart, keening and bluesy phrases, curled bursts of energy clambering out of a taut horizon. Morgan follows with punchy arpeggios and half-valve calls; he approaches the net of obliquely dissonant drone with the rich lines of a balladeer, sounding both challenged and entirely within his "bag." Indeed, all three hornmen treat their solo spots as shaky soliloquy rather than exploring the possibilities of silence and mass a la Feldman and Ligeti (composers to which this piece offers some kinship).

While the first two pieces lean to the left of possibilities engendered by "modal jazz," the date closes with comparably more traditional tunes. "The Coaster" is jaunty, riff-laden post-bop out of a similar vein to "Riff Raff," which appeared on Destination Out!. So much credence could be given to McLean's poetic verbosity or Morgan's darting miniature explosions at the hand of Williams that the leader's solo statements might go unnoticed, which would be unfortunate. What might be termed "cool" is slick, effortless elision, the trombonist opting for evenly-paced thematic probes rather than the explosive peals chosen by his companions. "Monk in Wonderland" places side-by-side brassy swagger and detailed modal clambering, a nod to where Moncur's approaches to space and sound might also come from.

Moncur would go on to record dates with pianist Herbie Hancock and saxophonist Wayne Shorter, including one more as a leader for Blue Note, Some Other Stuff (Blue Note, 1965). His association with the avant-garde and new Black music became more distinct in the latter half of the 1960s as he worked with saxophonists Archie Shepp and Marion Brown, drummer Sunny Murray, and bassist Alan Silva, including a trip to the Pan-African Festival in Ketchaoua, Algeria in 1969. Yet this debut displays keen orchestration and a dedication to form, qualities which imbue his playing and would ground that of others. Talk about a title instilled with artistic prophecy.
Posted by Zen Archer at 9:24:00 PM