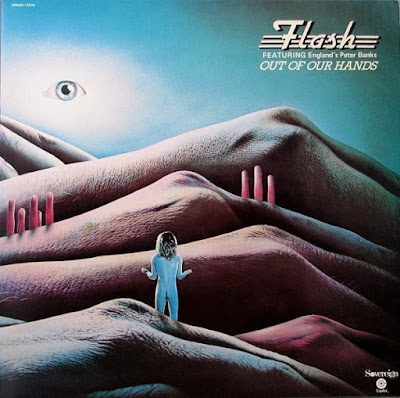 What do chess and an interstellar messenger of peace have in common? Nothing, I'd venture, but it didn't stop Ray Bennett from laboring on this stellar concept album all the same. Like any FLASH album, the comparisons to early YES are invited and no doubt appreciated. There are plenty of moments here that'll transport you to strange new places, provided you're willing to put in the same amount of effort you did on "Tales of Topographic Oceans".
Bennett and Peter Banks in particular connect on some passages that click as well as Chris Squire and Steve Howe. It occurs to me when I listen to "Out of Our Hands" that this might be the lost YES album I've been looking for. Certainly it's closer to the mark than Steve Howe's Beginnings, In The Can or Two Sides of Peter Banks. Almost every song on here has some redeeming moment of magic, from the opening of "The Bishop" (which prefigures Gang of Four by at least a few years) to the tripping guitar lines on "Dead Ahead". Maybe I've grown used to Colin Carter's voice by now but he does seem better suited to the music this time, suggesting Jon Anderson's voice with clipped wings. Where Anderson soared, Carter is entrenched, holding steadfast in the midst of Banks' acrobatic leads and Bennett's bold bass lines.

The result is a style that produces some fine moments, including "Man of Honour", "Shadows" and delightful "Psychosync". As busy as Bennett is with writing most of the material and playing bass, his keyboard contributions are cursory, which results in some missing music. If sections feel like they need to be fleshed out on occasion, it's to be expected with FLASH. Their purpose was never to replace YES, but rather to build something different from the same foundation. Sadly, "Out of Our Hands" was their last album, and another avenue to nirvana was closed. This record (and, in fact the entire FLASH catalog) are well worth rediscovery -- the Dead Sea Scrolls of the Yesstory, in a manner of speaking.
Posted by Zen Archer at 1:37:00 PM