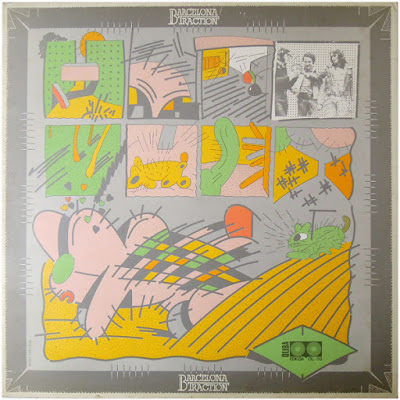 Barcelona Traction was a Spanish Jazz-Rock trio from Barcelona whose origins are to be found in the NEW JAZZ TRIO who in the early 70?s played in the Barcelona jazz clubs circuit and became a regular in perhaps the most famous venue La Cova Del Drac.

The pianist was Lucky GURI (real name Joaquim Lluis GURI) who incidentally in 1972 together with German saxophonist Peter ROAR from MAQUINA! (who's real name spelling was Rohr but adapted it because Spanish people had trouble to pronounce it correctly) and support from other MAQUINA! members recorded the album We Are Digging The Beatles with jazzified covers of The BEATLES songs. The original vinyl of this album is quite valued by collectors because shortly after its release it had to be removed from the market due to pressure from The Beatles management because the authors rights had not been properly handled (nowadays it has been reissued in CD by the Spanish label Picap).

Around 1974 NEW JAZZ TRIO?s pianist GURI and contrabassist Jordi CLUA decide to change their acoustic instruments by electric ones and recruit drummer Francis RABASSA who was coming from the rock band Los Gatos Negros, and in May 1975 they recorded their eponimous debut album Barcelona Traction.

The music is regular instrumental Jazz-Rock with the keyboards (piano, lots of Rhodes and Moog) taking the leading role on a very solid rythmic section supported by 2 guest percussionists. Nothing particularly groundbreaking but very good compositions combining strong melodies with great improvisation sections, and exquisitely performed.

Highly recommended for listeners who enjoy the jazzier and more accessible side of Jazz-Rock/Fusion.

In July 1975 they performed at the mythical (for Spanish standards) 1st Canet Rock Festival with very good critical acclaim (a short excerpt is available in YouTube).

However in 1976 Lucky GURI left to MUSICA URBANA and while BARCELONA TRACTION continued playing concerts with replacement keyboardist Josep Maria DURAN they did not record any new album and finally disbanded in 1977 with CLUA and RABASSA moving to the band of Catalan singer-songwriter Joan Manuel SERRAT and later to the Fusion band TEVERANO with whom they released their eponimous only album in 1981.

In 1982 the original line-up with GURA, CLUA and RABASSA rejoined to release a last album Nano which moved away from the rock side of Jazz-Rock and instead focussed on proper jazz with some elements from funk and music-hall music.

Lucky GURI continued his career concentrated in jazz and became one of the most highly regarded jazz pianist in Barcelona, his popularity boosted by his regular performances in Catalan TV shows.

The eponymous debut album by this Spanish trio can be probably better defined as Electric Jazz than as Jazz-Rock, but it can still be very groovy and nearly rocking at times. We have a very solid rhythmic section with Jordi Clua at the bass and Francis Rabassa at the drums supported by 2 guest percussionists, while all the melodic and soloing work is taken care by keyboardist Lucky Guri, with predominance of acoustic piano and Rhodes and some Moog here and there for the atmospheres and some lead lines. It is completely instrumental.

The music is very accessible and melodic and conforms for the most part to classical jazz structure with alternating melodic lines and improvisation, but it shows strong and tasteful musicianship and it is performed skillfully. Actually Lucky Guri continued his career focusing on proper jazz and became perhaps the most respected jazz pianist in Barcelona.

The opener 'Has vist passar els ocells' (You have seen the birds passing) is perhaps the worst song from a prog listener perspective, with a very sweet and accessible, relaxed- tempo melody and improvisation in Rhodes. This could be played in a cruise boat. Still it contains quality details in particular in the apparently simple but subtly great rhythmic section.

'Modulacions' is proper modern jazz. It starts with 2 minutes of groovy piano introduction after which powerful and syncopated drums and bass join, and gradually develop into a fast jam with a great piano improvisation ending in typical jazz structure with a coda to the melody for the last half minute.

'Estudi en Afro' has another beautiful piano intro until the rhythm section enters to form a pattern of alternating 7/8 and 4/4 beats on which Guri deploys more the synth for the melodic lines and soloing. Around the middle it gets groovier with the addition of latin-like percussion and a Rhodes improvisation and ends again with a coda back to the main melody.

'Sudamerica' has many interesting tempo changes, it starts with soft Rhodes and soon drums and bass join forming an accessible mid-tempo tune alternating melody and improvisation, but as from 2m00s the structure gets more complex with constant tempo switching between slow and fast, some wah-wah bass soloing and a gradual crescendo ending up with frantic piano soloing. Great stuff.

The closer 'Foc I Pluja' (Fire and Rain) is a very loose interpretation of the song by James Taylor and probably the most adventurous track. After an atmospheric introduction the bass starts a simple and repetitive but very catchy line and the melody is introduced in Rhodes, but quickly develops into a long improvisation. Around 5m15 we have a melodic break and a return to improvisation, this time with added percussion, and a final melodic break returning to the atmospheric introduction theme and song melody line.

There is nothing groundbreaking in this album and it will not appeal to listeners looking for the more complex or heavy side of Jazz-Rock, but I find it a real pleasure to listen to and I highly recommend it to those who can enjoy straightforward but impeccably composed and performed Jazz-Rock leaning more to the Jazz that to the Rock.
Posted by Zen Archer at 4:54:00 PM