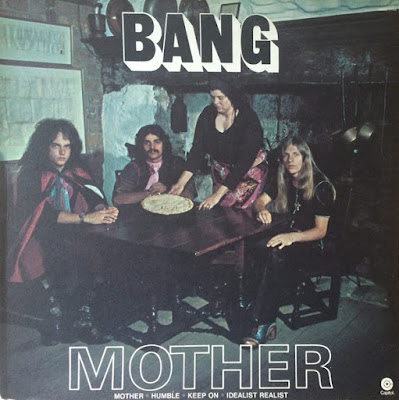 Bang's 1972 release Mother / Bow to the King is definitely their masterpiece. It's also of the the best unknown Proto-Metal albums of the 1970s. These guys do the primordial stomp and wail to perfection. Idealist Realist is a pure slice of unadulterated Heavy Metal thud, bluster, and swaggering attitude. It has some of the heaviest chordal guitar slabs outside of a Sabbath or Zeppelin album. Bow To The King is simply smooth and amazing. And their heavy cover of The Guess Who's No Sugar Tonight simply has to be heard. If You love original Heavy Metal, or love Hard Rock this album is for you.

Bang's second album, 1972's Mother/Bow to the King is not as heavy as their debut from earlier the same year but still delivers really good 1970's proto-metal. The funkiness of "Keep on" is just brilliant and it's the A-side, or the first four songs, that is the heavy part of this album. Not that the B-side, or the last four songs, are bad but they are more hard pop than hard rock, just listen to the na-na-na in "No Sugar Tonight".
Still worth one spin or two if you like 70's hard rock.
Rock hard!
Posted by Zen Archer at 12:48:00 PM