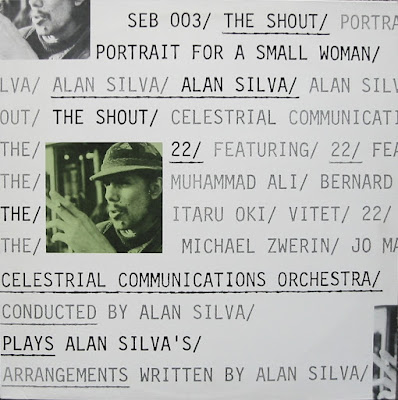 
Ten years after his legendary debut ("excellent" or "unacceptably chaotic cacophony", depending on the listener's taste) Alan Silva released his third studio album (and first studio recording in ten years) entitled "The Shout (Portrait for a Small Woman)".

At that time, Silva was working as a teacher in the Institute for Art, Culture, and Perception in Paris, and the material comes mostly from his teaching work. He doesn't play any instruments on "The Shout", but instead leads a 21-piece orchestra that is a combination of Silva's "Celestrial Communications Orchestra" plus his students. Silva wrote and arranged all the music and he conducts the orchestra as well.

Musically, this album is not similar to his debut, at least not from the first spin. Seven well structured, completely pre-composed tunes, all under 10 minutes long, are rooted in Ellingtonian tradition and post-bop. But during the listening one can easily hear Silva's background as a late 60s unorthodox experimentalist. All the arrangements contain that non-conformist, even chaotic element, coming from his debut, just here it is presented in a the form of modern European classical composition.

Among the orchestra members, I found just a few known names (at least for me); trumpeters Itaru Oki and Bernard Vitet, and drummer Muhammad Ali are among them, but in all, this collective sounds very professional and inspired playing quite complex compositions.

Much more accessible than the early Silva works, this album still contains lot of his extravaganza, so it could be easily recommended as an entry point. At the same time, it's a great (if obscure) addition to Silva's quite limited collection of releases.