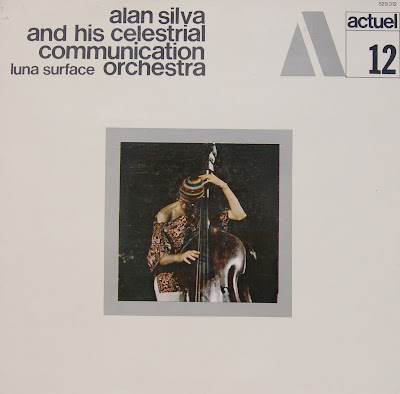 Silva was born a British subject to an Azorean/Portuguese mother, Irene da Silva, and a black Bermudian father known only as "Ruby". He emigrated to the United States at the age of five with his mother, eventually acquiring U.S. citizenship by the age of 18 or 19. He adopted the stage name of Alan Silva in his twenties.
Silva was quoted in a Bermudan newspaper in 1988 as saying that although he left the island at a young age, he always considered himself Bermudian. He was raised in the Harlem neighborhood of New York City, where he first began studying the trumpet, and moved on to study the upright bass.
Silva is known as one of the most inventive bass players in jazz[2] and has performed with many in the world of avant-garde jazz, including Cecil Taylor, Sun Ra, Albert Ayler, Sunny Murray, and Archie Shepp.

Silva performed in 1964's October Revolution as a pioneer in the free jazz movement, and for Ayler's Live in Greenwich Village album. He has lived mainly in Paris since the early 1970s, where he formed the Celestrial Communication Orchestra, a group dedicated to the performance of free jazz with various instrumental combinations. In the 1990s he picked up the electronic keyboard, declaring that his bass playing no longer surprised him. He has also used the electric violin and electric sarangi on his recordings.
In the 1980s Silva opened a music school in Central Paris, introducing the concept of a Jazz Conservatory patterned after France's traditional conservatories devoted to European classical music epoch

Even though I'm now 49 years old old I haven't given up my quest of finding music that truly pushes the extreme. Every time I think I have heard it all something always shows up that completely tears my head off & humbles me. I once thought the Nihilist Spasm Band was about as far out as you could get, then of course somebody played me a copy of Harry Chapin's "Sniper" album and it was back to the drawing board. Well my latest entry in the "Most Fucked Up Album Of All Time" stakes is this 1969 outing by Alan Silva And His Celestrial Communication Orchestra. This album really has hair on it.

Silva is best known as being Albert Ayler's bassist and the author of the skull crushing "Skillfulness" album for ESP-Disk. He also put together this mammoth ensemble with the intention of updating John Coltrane's "OM" and "Ascension" & Ornette Coleman's "Free Jazz." After hearing "Luna Surface" I would have to say he was successful. Silva is the director of a supergroup that features Archie Shepp, Anthony Braxton, Dave Burrell, Malachi Favors and other "heavy" friends. What is basically on offer here is a 30 minute non-stop free jazz cluster-bomb. It makes The Stooges "L.A. Blues" sound like Boots "Fucking" Randolph and his Yakety "Fucking" sax.

These guys mean business, and sheer power of the playing of everyone involved is astounding. I haven't heard this many elephant honks since my fifth grade field trip to the Havana Zoo. Holy Toledo!

A friend of mine and I rang in the New Year with this album while watching Mariah Carey on Dick Clark's New Year's Rocking Eve (or whatever the fuck it's called.) I then went out and shot 100 jumpshots on the basketball court down the street in 20 degree temperatures. This album can do crazy things to you.
Posted by Zen Archer at 5:17:00 PM