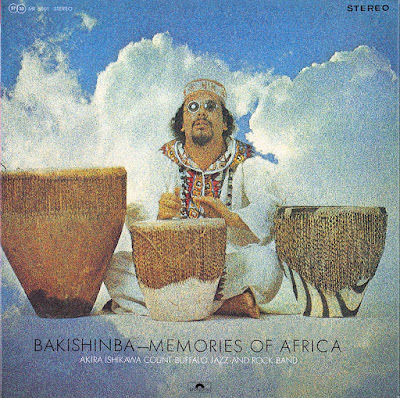 Great drummer & bandleader, Akira Ishikawa featuring his Count Buffalo band who were prolific on the japanese Jazz Rock scene of the late 60s and early 70s. He was also a member of the legendary japanese quintet the Freedom Unity with Hiromasa Suzuki and Takeru Muraoka. Akira explores African rhythms and creates an intelligent fusion of Jazz, Soul and Rock as evidenced the 'African Deer' suite, all in collaboration of two great arrangers, Norio Maeda & Hiromasa Suzuki. This 'African' orientation will reach its apogee with cult album, 'Unganda', released in 1972. Titles include Sandstorm & Sunrise composed by M. Yoshino, Flamingo & African Deer by Norio Maeda, Bakishinba, Mirage & Blue Soul by Hiromasa Suzuki. All tracks arranged by Norio Maeda & Hiromasa Suzuki.
Solid Afro inspired funky jazz set from Ishikawa & Co . Seven original compositions from Maeda , Suzuki & Yoshino make for a good listen and ensure this is one of the most consistent Count Buffalo albums…..

Ishikawa is a jazz percussionist with a long career, being active since the mid 50’s. He was bandleader for the Japanese version of ‘Hair’. Ishikawa has often worked with Masahiko Satoh [see below], who also features in the Count Buffalos band at some points. What might be their first album was credited to Count Buffalo & the Jazz Rock Band – ‘Soul & Rock’ [Denon, 1969] – and is pretty straight stuff. ‘Electrum’ [Victor, 1970], credited to Akira Ishikawa & Count Buffalos, featured jazz rock and free jazz composed by Satoh; if you like the fusion of that era, you will probably agree this is a pretty good album with great playing. ‘Bakishinba - Memories of Africa’ [Polydor, 1970], credited to Akira Ishikawa Count Buffalo Jazz and Rock Band, came next; the music is mostly fairly predictable, but very well done, laid-back electric jazz rock. The nearly-11 minute title track has more freewheeling intensity, and is a highlight of the album for me, the whole of which starts out a little bland but improves in creativity as it goes on. Despite this, it never gets that far out, unlike the remarkable follow-up album ‘Uganda’. ‘Bakishinba’ has been reissued on CD by USM Japan, in a gatefold mini-LP sleeve with a fold-out poster of Ishikawa [and Japanese liner notes on the other side]. After this, Ishikawa went to Uganda and absorbed the native music, bringing home new experience and numerous African percussion instruments to add to his sonic palette. The result, co-composed with Takeru Muraoka [who had played with Terumasa Hino was ‘Uganda (Africa Rock No Yoake [‘Dawn of African Rock’])’ [Toshiba-EMI, 1972], which has been referred to incorrectly with the band name being Uganda. Oddly, it was also influenced by Tony Williams’ Lifetime. Around half the album is African-styled percussion from Ishikawa and Larry Sunaga, with guitarist Kimio Mizutani [see below] and bassist Hideaki Chihara [ex-Adams] joining in the rest of the time for some primal acid rock jams. People usually comment on the fuzz guitar work, but to my ears although the playing is excellent the fuzz is very mild compared to the occasional distorted bass guitar explosions [at least it sounds like bass to me, and I’m a bass player too]. One song even has some brief moments that sound like Egg! It has been reissued on LP by Shadoks, reputedly a bootleg, and has recently been reissued legally on CD by Tiliqua, from the master tapes and with excellent liner notes. This reissue also comes in a miniature box that replicates the original packaging.