Akira Ishikawa
1975
Back to Rhythm 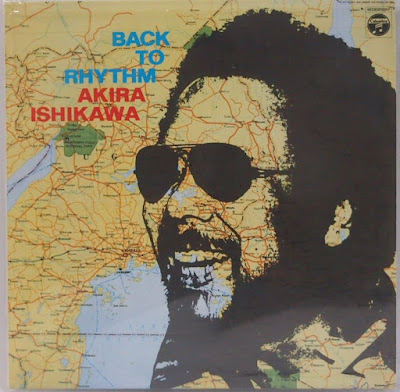 A Jazz Funk album which closing the African period of Akira Ishikawa, always surrounded by his fabulous Count Buffalos featuring Kiyoshi Sugimoto, Takeru Muraoka, Larry Sunaga plus arranger Hiromasa Suzuki. Titles include Pop covers from The Beatles to Simon & Garfunkel, classics of Funk as the Do It Til You're Satisfied of the BT' Express or the Boogie On Reggae Woman by Stevie Wonder, a groovy variation of Pick Up The Pieces by the Average White Band (played like James Brown), I Shot The Sheriff (from the Eric Clapton version), Bongo Rock (Incredible Bongo Band) and the Fela Kuti's Let's Start. All tracks arranged by Hiromasa Suzuki.

After falling in love with Assagai's VERY unusual cover/Highlife reinterpretation of Hey Jude in the Yoruba language (and later putting it on one of my lists), I then find myself today combing through my Pile 'o Jazz, stumble across a couple Ishikawa records I haven't gone through yet, throw this on, and find myself listening to the very same Hey Jude cover. Not Ishikawa covering The Beatles' Hey Jude. This is Ishikawa covering Assagai covering Hey Jude. He's even singing the lyrics in Yoruba.

I legitimately got paranoid for about five seconds that I was in a dream. It seemed way too surreal to be right. Assagai's debut didn't sell well at all. Copies of the original US, UK and Canada Vertigo LPs aren't mega-ultra-rare, but they're not cheap. So I had to convince myself that a guy who was better known for gimmicky combinations of African percussion and Japanese free jazz... bought a Highlife album that sold like herpes-flavored pickles... and then covered THAT version
Posted by Zen Archer at 4:28:00 AM