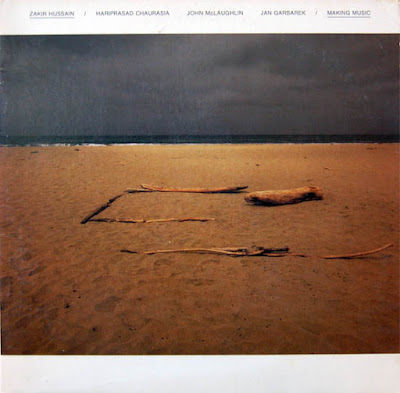 
Zakir Hussain is today appreciated both in the field of percussion and in the music world at large as an international phenomenon. A classical tabla virtuoso of the highest order, his consistently brilliant and exciting performances have not only established him as a national treasure in his own country, India, but gained him worldwide fame. The favorite accompanist for many of India's greatest classical musicians and dancers, from Ali Akbar Khan and Ravi Shankar to Birju Maharaj and Shivkumar Sharma, he has not let his genius rest there. His playing is marked by uncanny intuition and masterful improvisational dexterity, founded in formidable knowledge and study.

A child prodigy, Zakir was touring by the age of twelve, the gifted son of his great father, tabla legend Ustad Alla Rakha. Zakir came to the United States in 1970, embarking on an international career which includes no fewer than 150 concert dates a year. He has composed and recorded many albums and soundtracks, and has received widespread recognition as a composer for his many ensembles and historic collaborations. Most recently, he has composed soundtracks for the films In Custody, Ismail Merchant's directorial debut, Little Buddha by Bernardo Bertolucci, for which Zakir composed, performed and acted as Indian music advisor and Vanaprastham, chosen to be screened at the Cannes Film Festival in May, 1999.

Zakir received the distinct honor of co-composing the opening music for the Summer Olympics in Atlanta, 1996, and was commissioned to compose music for San Francisco's premiere contemporary ballet company, Lines, and to compose an original work for the San Francisco Jazz Festival, both in 1998. He has received numerous grants and awards, including participation in the Meet the Composer programs funded by the Pew Memorial Trust.

In 1987, his first solo release, Making Music, was acclaimed as “one of the most inspired East-West fusion albums ever recorded.” In 1988, he became the youngest percussionist to ever be awarded the title of “Padma Shri” by the Indian government, a title given to civilians of merit. In 1990, he was awarded the Indo-American Award in recognition for his outstanding cultural contribution to relations between the United States and India. In April, 1991, he was presented with the Sangeet Natak Akademi Award by the President of India, making him one of the youngest musicians to receive this recognition from India's governing cultural institute. Zakir is the recipient of the 1999 National Heritage Fellowship, the United States' most prestigious honor for a master in the traditional arts.

In 1992, Planet Drum, an album co-created and produced by Zakir and Mickey Hart, was awarded a Grammy for Best World Music Album, the Downbeat Critics Poll for Best World Beat Album and the NARM Indie Best Seller Award for World Music Recording. Planet Drum, with Zakir as music director, toured nationally in 1996 and 1997. Zakir continues also to tour with the musicians from Shakti--John McLaughlin, Shankar and T.H. Vinayakram--in different collaborations and ensembles as well as lead various percussion ensembles of his own design. In Summer '99, Shakti re-grouped for an international tour.

In 1992, Zakir founded Moment! Records which features original collaborations in the field of contemporary world music, as well as live concert performances by great masters of the classical music of India. The label presents Zakir's own world percussion ensemble, The Rhythm Experience, both North and South Indian classical recordings, Best of Shakti, and a Masters of Percussion series.

The key to Making Music lies in its title. This is not about a fusion of East and West. This is about creation for its own sake. The selfsame track opens our ears to the flute of Hariprasad Chaurasia, who turns breath into gold. Guitarist and Mahavishnu Orchestra guru John McLaughlin is another welcome addition to a quartet rounded out by saxophonist Jan Garbarek. As lines curve their way through subtle changes in temperature, we can feel the rhythm being formed, piece by ephemeral piece, even before Hussain lays hands to drum. Garbarek works some of that same magic that enlivened his earlier recordings with Shankar, while McLaughlin showcases his mastery of classical forms (the duet with Hussain on “You And Me” is one of many highlights), matching the tabla master’s deftness with ease.

Yet Chaurasia is the jewel of this session. His dialogues with McLaughlin (“Zakir” and “Sabah”) in particular reveal a purity of tone all his own. Sometimes, he lowers the threads from which the music hangs, pulling us along with them into a verdant sky. Others, he bends like an outstretched leaf hit by the first raindrop of spring (“Toni”). The album’s remainder is filled with rainbows. The most verdant of these is “Water Girl,” a mosaic spread with saffron and rosewater, willed into life by that generative flute. Garbarek makes his voice clearest in “Anisa,” which first pairs him with McLaughlin in an exchange at once forlorn and sweet before Hussain regales with such grace that one has to wonder if his fingers aren’t pure energy. After this saga of tribulation and triumph, Garbarek’s skyward incantation in “Sunjog”—incidentally, another standout for McLaughlin, who shares a winged exchange with everyone in turn—proves well suited to this musical nexus, for he, like the others, plays not in unison but in tandem, and in so doing binds the overall unity toward which they strive together. And so, when they do join in the occasional doubling, the sound becomes gentler, each voice restraining itself so as not to overpower.

Hussain is a carpenter who delicately hammers the edges of every project he touches into perfect alignment. Yet after listening to Making Music, one has the feeling this project had only just begun.