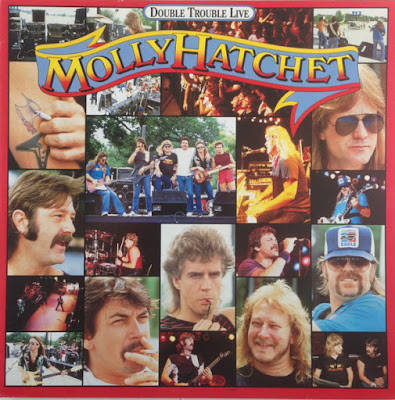 Considering Molly Hatchet had been a successful act for nearly a decade up to this point, a double live LP seemed like a token gesture in 1985. The live environment was Hatchet's strength, but by 1985 trends were changing within American radio, and lengthy live albums were on the way out. Did Hatchet miss the boat? History would probably say yes, but somewhere along the way, Hatchet's discography would be sorely inadequate if a live album (or double live album) wasn't there. Up to this point, band membership was like a yo-yo. Players leaving, then returning, as in singer Danny Joe Brown and drummer Bruce Crump. The fan-base was losing touch with the band's output. 1983's 'No Guts No Glory' was a southern rock return to form, only to be off-set by 1984's 'The Deed Is Done' which went full circle back to radio friendly AOR. The band couldn't quite make up their mind which way to roll the dice.

Like many other live albums recorded, there's been hefty discussions on how 'live' is a live album. Evidence of much studio tinkering has been identified on some of the greatest records ever recorded. To my ears, 'Double Trouble Live' keeps it real for the most part. The performances were lifted from shows in Dallas and Jacksonville, and if I was a time traveller going back to the 80's, I would've loved to have been in the front-row of a Molly gig. The two major covers included here are Lynyrd Skynyrd's 'Freebird' and the Allman Brothers Band 'Dreams I'll Never See'. Both southern rock chestnuts that get taken out of the fire for an airing. Still, you get decent renditions of their finest moments committed to vinyl, played out in a live capacity. Check out their own classic epic 'Boogie No More', which makes for some astounding listening. My favourite is the full-tilt 'Beatin' The Odds', which was one of the best boogie efforts from 1980.

The original LP included two previously unreleased tracks: 'Walk On The Side Of Angels' and 'Walk With You', though these were removed on the CD version of the album, so as to fit everything on a single CD. Both took a 'walk' so to speak. From 1985 onward, the band went into a cryogenic state, not releasing a new studio album until 1989. In fact, many of the southern rock greats took a back-seat during this timeframe. The notable exception being 38 Special, though they had dropped their original roots for something more radio oriented and commercial. Still, 'Double Trouble Live' is a worthy addition to your collection.
Posted by Zen Archer at 11:29:00 PM