Molly Hatchet
1984
The Deed Is Done 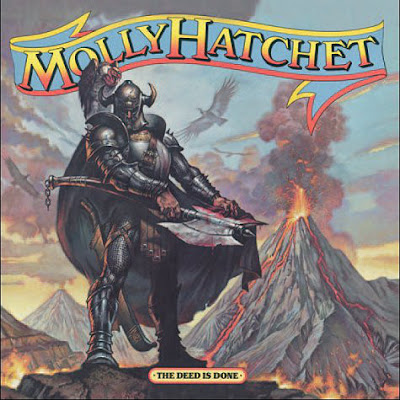 
In what would be their last studio album until 1989, Molly Hatchet finally followed the lead of .38 Special and dived into the Southern-AOR market. 1983's 'No Guts, No Glory' was traditional boogie the band was renowned for, but with declining album sales Hatchet bought in outside writers and took a stab at a genre providing hits for so many artists. They were successful: musically. They didn't disown their roots either, just combined the two.

Die hard Hatchet fans must have been livid as soon as they heard 'Satisfied Man'. It took only seconds for John Galvin's modern synths to erupt, in a fashion Hatchet were previously unaccustomed to. Then the chanted chorus hits, with a steely riff, with just enough Southern overtones to keep the fan base happy. 'Backstabber' is AOR, simple as that. The chorus is first rate, until they repeat it several hundred times. Hlubek and Roland really deliver on their solo's, mastering the art of the melody needed to make classic AOR. 'She Does, She Does' has Brown bellowing in his unique style, backed up by that instrument of power, the sax. By this point the band can do no wrong! 'Stone In Your Heart' could easily be a Survivor or Michael Bolton written tune, huge made for radio chorus and moody synthesizer backing should have made this a no 1 hit. By the time of the solo, you will be caught in a time warp, circa LA 1984. For their die hard fans, this must have been a bitter pill, but for fans of both it's a dream come true. 'Man On The Run' is another singalong overdose, the hook driven home so thoroughly, you will never forget it. After all this magic Hatchet move back into usual territory with 'Good Smoke And Whiskey' and 'Heartbreak Radio', cranking out some boogie riffs and piano instead. This further accomplishes the album. 'Straight Shooter' is fantasy music, an AOR verse with boogie backing. The album ends an instrumental, 'Song For The Children', an acoustic showcase. Quite a mystifying choice considering what preceded it.

Unfortunately Hatchet's moment had passed and 'The Deed Is Done' failed to chart in the US. A live album 'Double Trouble' followed, but it wasn't until 1989's poor 'Lightning Strikes Twice' that new material surfaced. After that more silence, but 1995's 'Devils Canyon' saw a resurgence that Hatchet have built on steadily since, even though no original members remain. It must be noted that current vocalist Steve Bassett provided backing vocals for 'The Deed Is Done'. As far back as 1984 he was involved with Hatchet. Probably the most forgotten of all Hatchet albums from 78-84, it is still one of the best. Southern rockers and AOR fans never had it so good.
Posted by Zen Archer at 11:25:00 PM