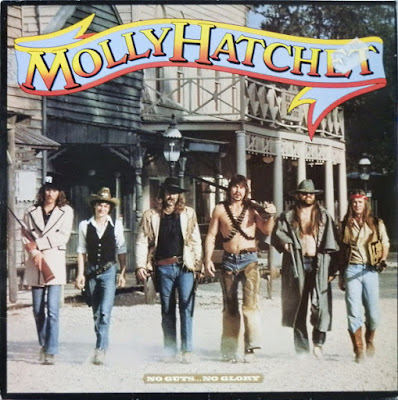 
Following two albums with the excellent Jimmy Farrar, Danny Joe Brown returned to the Molly Hatchet fold in 1983, after suffering health issues which had caused his departure in 1980. This wasn't the only change, with original members Banner Thomas and Bruce Crump also leaving the outfit, being replaced by stalwarts Riff West and ex Mothers Finest drummer Barry 'B.B.' Borden. Despite this upheaval the resulting album was another classic from Hatchet and up to that point they hadn't released a single dud yet. As great as Farrar was, nothing could surpass Brown as the Hatchet frontman and with his familiar harder edged vocals, the band sounded a lot heavier than they did with Farrar. The cover was another departure, lacking the usual fantasy type illustration and replaced by the band itself, looking menacing in their western apparel, ready for a shootout apparently.
This is a classic from the outset, 'What Does It Matter' surging with riffs recalling the first two albums and complimented by Brown's welcome gruff vocals. Melodically it's superb and it's possible to see shades of their AOR future, but it's Southern Rock to the hilt. 'Ain't Even Close' is vintage Hatchet all the way and clearly Brown's return had inspired the band to turn it up a notch or ten volume wise. Nothing can beat the ultimate boogie of 'Sweet Dixie' however, one to raise your fist and headbang to, especially for the Southern crowd. The guitar solos and handclaps define the genre, making their fellow brethren like Blackfoot, .38 Special</b> etc seem tame by comparison. The epic 'Fall Of The Peacemakers' has gone down as a legitimate Hatchet classic and is still played to this day by the current lineup. Like all Hatchet epics it builds into a roaring crescendo, with the triple guitar attack utilized to all its potential. There's a massive AOR element to 'What's It Gonna Take' and it makes sense considering it was written by Canadian melodic rock exponent Gary O' Connor. This one showed up on Fast Forward's 'Living in Fiction' also, but this is the definitive version. 'Kinda Like Love' turns the intensity down, a catchy country jaunt written by outside writers Bobby Ellison and Mac Elsensohn and one which safely inhabits the AOR/country crossover ground where you might find an Alabama for example. By comparison 'Under The Gun' is speed metal, one of the heaviest tracks ever conjured by Hatchet. This is devastating material and could only be achieved with Brown at the helm in my opinion. 'On The Prowl' is another worthy slice of traditional Hatchet and the instrumental closer 'Both Sides' is remarkably atmospheric in terms of guitar work, evoking the dusty old West.
It's hard to believe how Hatchet went from this to pure AOR in the space of a year. While 'The Deed Is Done' is a great example of a Southern band turning melodic, I'd rather hear more of the grit displayed on 'No Guts..' That's the true Molly Hatchet, even if they weren't quite the accomplished AOR purveyors. I guess they had to keep up with their contemporaries, but for all purposes this album was their last real Southern album. Nothing has come close since, despite some commendable efforts with Phil McCormack and Bobby Ingram leading the band. Hatchet was unstoppable live on the tour promoting this and I suppose it was the end of an era in some regards. This never quite gets its due as an upper echelon Southern genre album and it's a shame. As such it's truly indispensable.