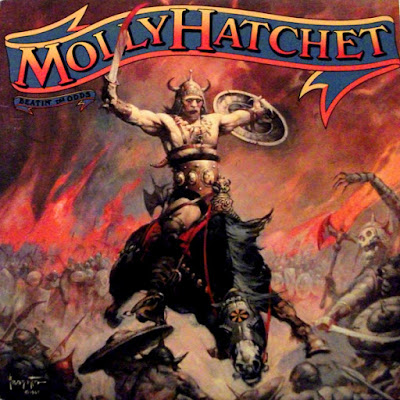 By the summer of 1980, I knew that Southern Rock had established itself up North and was listened to quite extensively there. However, in the August of the same year, I learned that it had made its way across the Atlantic when I saw this very album from Molly Hatchet on sale in a record shop in The Hague, Netherlands. The very same marine buddy who first introduced me to Southern Rock was with me at this time and we did both exceedingly rejoice in the fact that Molly Hatchet was listened to in Europe.

Being very predictable here but one can’t fail to mention that “Beatin’ The Odds” was the first album to feature Jimmy Farrar as lead singer who had replaced Danny Joe Brown who left the band on account of alcohol problems or so I’m told. Many Hatchet fans want to totally forget the Jimmy Farrar period of the band’s career but when I listened to the album a couple of days ago, (the first time in about 30 years) I tried to do so in a more open minded manner.

First, Jimmy Farrar is not that bad of a vocalist. Had he come out with another band, he probably would have been right up there with many of those who were around then. The unfortunate thing for him was that he had some very big shoes to fill when he replaced Brown at the mike. Saying that, I feel that the album still lacks a bit of punch to me when compared with the epic “Flirtin’ With Disaster” album. Yes, Molly Hatchet still plays that Southern bad boy boogie sound and this is in no way a bad album, but it is a quite a come down from the previous one. The track that stands out for me is “Penthouse Pauper” which has a great guitar intro and the title cut is pretty good too. “Sailor” is also a strong track. However, in spite of all the good things, to me, “Beatin’ The Odds” lacks something.
Posted by Zen Archer at 10:33:00 PM