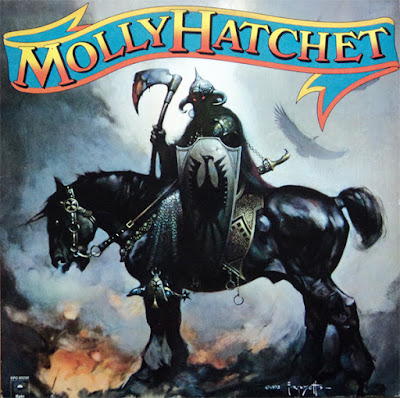 Molly Hatchet are a southern rock institution, that much we all know. Formed in Jacksonville, Florida in 1971 and founded by Dave Hlubek and Steve Holland, Molly Hatchet derived its name from a 17th Century badass woman practicing in the oldest profession on Earth, who topped her clients as she went, in the vein of Lizzy Borden. Touring and building up a following during the 70's, Hatchet's big break came at the expense of another band, Georgia southern rock legends Lynyrd Skynyrd, who tragically lost personnel in a 1977 plane crash. Managed by Pat Armstrong, Hatchet were signed by Epic Records and were ear-marked for a release in 1977 with Skynyrd's Ronnie Van Zant to handle production, but Van Zant was one of the people killed in the plane crash, so things were put back by a year. Tom Werman came in to produce instead, Hatchet using some of Skynyrd's gear to record demos with. Hatchet were a well-hewn machine, bought up in the tough Florida roadhouse and bar environment. It's this rough and ready attribute that allowed the band to create a dynasty which survives to this day. Intererestingly though, the initial Hatchet sound was quite smooth, given Werman's production and the budget that Epic Records provided. Certainly not a rough n ready prospect one was expecting, but the real deal is the three-pronged guitar attack combined with the fantastic vocals of Danny Joe Brown.
The Molly Hatchet debut, released in late 1978 was, in my opinion, a game-changer for the whole southern rock music industry. It saw the combination of traditional southern rock, boogie, blues and 70's classic rock all rolled into one. They were positioned differently to other bands in the same genre at the time, with only fellow locals Blackfoot and Georgia band Doc Holliday following a similar style a few years later. I would've thrown .38 Special in there too, but they were way too radio-friendly by comparison. Keeping it southern all the way, the fantastic 'Bounty Hunter' kicks things off, a future standard signature track and setlist favourite. 'Gator Country' by comparison is quite laid back, and even with all the DJB wolf whistles (he should've been a farmer doing the dog trials!) this gathers pace toward the end. New York City gets a mention on 'Big Apple', a boogie oriented effort with a shuffly sort of sound. I haven't yet worked out whether 'The Creeper' refers to a mass-murderer type or simply a reference to the Devil. Notwithstanding, the song is a slow-to-mid tempo blues burner. Changing style yet again, 'The Price You Pay' is a cool funky like southern rocker, it's followed by the <b>Allman Brothers</b> cover off 'Dreams I'll Never See', which at 7 minutes is the albums 'epic moment'. Not having heard the original, this is a pretty good song given Hatchet's interpretation, so I'll need to check out the original pronto. By this stage of the album, Hatchet keep the momentum going, and 'I'll Be Running' is an appropriate tune. The groovy guitars smoke up the studio with some hot riffing by all three guitarists. 'Cheatin' Woman' features some searing guitar work, and though the tempo might be down to plodding pace, the intensity is high. Finishing up as the ninth track, 'Trust Your Old Friend' moves with the same style and energy as another MH fave; 'Jukin' City', which can be found on their next album 'Flirtin' With Disaster'. It has a definite boogie feel, not unlike L.A boogie merchants A la Carte
The very best cover tunes are those in which a band takes a song and, through its interpretation and the application of it's unique sound, makes it patently their own. As we all know (from hearing umpteen horrible mistakes...), this isn't easy. First, it presumes that the covering band actually HAS a unique sound. Some of my favorite successful covers include Joe Cocker's take on "A Little Help From My Friends" and Devo's "Satisfaction." What's even rarer and more beautiful is when a band's cover actually improves upon the original. Such is Molly Hatchet's cover of Gregg Allman's "Dreams," which makes this recording (or the excellent Essential Molly Hatchet collection) well worth owning.
Molly Hatchet comes out of the chute kicking and screaming on this, the band's debut effort. With obvious influences including fellow Floridians Lynyrd Skynyrd, as well as the Allman Brothers, Mountain, and any number of other hard rock bands, Hatchet didn't take long to catch on with what would become legions of fans. Songs like "Bounty Hunter" and the cover of the Allman Brothers Band's "Dreams I'll Never See" helped to build a solid base of fans who still hold tight to their Molly Hatchet rock & roll dreams. All in all, a splendid debut album from a band that, in true Southern fashion, has had its share of ups and downs. And Danny Joe Brown proves that he is a singer to be reckoned with.
As mentioned, this debut album was released at the tail of 1978, and saw chart action the following year, reaching #64 in the Billboard album charts. During the early part of 1979, Hatchet toured with fellow Epic labelmates R.E.O Speedwagon and Ambrosia, fellow southern rockers The Outlaws, plus a couple of support dates on Rush's 'Hemispheres' tour during March 1979. The Jacksonville boys would soon return to the studio for what is arguably their best album, the aforementioned 'Flirtin' With Disaster'. In my opinion, all their studio albums through to their 1985 double live album are worth investing in.
Posted by Zen Archer at 10:04:00 PM