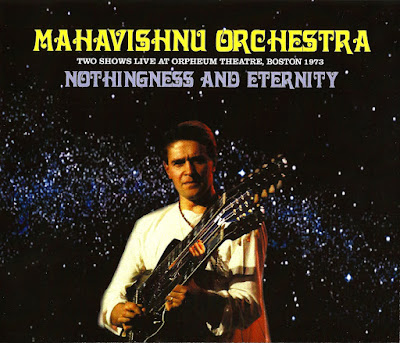 The early show performance begins with the opening track of their debut album, Meeting Of The Spirits. Rather than easing into this piece, the initial intro sequence is explosive, extended and pummeling in its ferocity. While initially more faithful to the original album arrangement than many performances during this era, it reaches far past the studio recording. This intense, high energy opener segues directly into "Open Country Joy." After the initial onslaught, this strutting, gradually intensifying urban blues is the least complex, most easily accessible music the classic Mahavishnu Orchestra lineup ever played. Vacillating between a laidback country feel and frenzied rocking power, its disarming rustic theme provides contrast to what preceded it. McLaughlin and Hammer's instrumental flights are tightly woven here, joyously dancing around each other and displaying their breathtaking improvisational abilities. This opening sequence clocks in at nearly 27 minutes!

As remarkable as this opening sequence is, it is a mere warm-up exercise to the devastating "Noonward Race" which follows. This is an absolute guitar shredfest, with McLaughlin playing with such passion, dexterity, volume, and sheer speed that he makes most rock guitarists appear to be asleep in comparison. Charged violin lines from Goodman, tasteful keyboard embellishments from Hammer and furious drumming from Cobham takes this piece blazing into the stratosphere. This is the Mahavishnu Orchestra at full throttle and playing at warp speed!

This leads up to a simply staggering performance of "One Word." Beginning with a haunting and frightening sequence that gives way to a relatively straightforward jam, McLaughlin adds delicious wah-wah guitar, while the bandmembers trade a seemingly endless barrage of solos. Billy Cobham gets a showcase in the middle, beginning smoothly and continuously escalating in both speed and dynamics, preparing one for the explosive second half of the piece. When the group launches back in, playing in 13/8 time, continually increasing in speed, McLaughlin, Goodman and Hammer all blaze away in a manner that is nothing short of telepathic. Beneath all this, Laird and Cobham anchor things, while contributing to the overall searing effect. This spectacular performance brings the early show to a close.

When they return to the stage for an encore, they begin with "Hope." Although brief, this unfolds in an elegant, magisterial way, before Cobham suddenly blasts off into "Awakening." Although incomplete, this too has moments of frightening intensity and the telepathy between these musicians is functioning at an astounding level.

The late show performance begins with the title track of the second album, Birds Of Fire. This intense, high-energy number then segues into McLaughlin's tribute to the master himself, "Miles Beyond," a funky and more relaxed display. Both compositions are way beyond the length of the studio recordings and the group's breathtaking improvisational abilities are beginning to reach new heights here. Clocking in at nearly half an hour, this opening sequence clearly displays the band taking the improvisational approach to new extremes.

The "Dream" that follows allows the group to stretch out even more. A masterpiece of tension and release, "Dream" is equal parts lush and ferocious and features four distinct time signatures. It begins in a tranquil manner, with McLaughlin and Goodman establishing the initial theme. At approximately five minutes in, Cobham signals the rest of the musicians to join in. Rick Laird establishes a strong groove on bass, which is reinforced by Hammer, who then begins soloing. Goodman's violin states the theme again several minutes later, before a ferocious jam ensues, with the tempo increasing faster and faster. This becomes a head spinning display of creativity and technical virtuosity. Toward the end, McLaughlin takes a searing solo that develops into ferocious instrumental combat between he and Billy Cobham, before all reinstate the theme and bring the composition to a dramatic close.

The only composition repeated from the early show is next, as the band delivers another staggering performance of "One Word." Beginning with a haunting and frightening sequence that gives way to a relatively straightforward jam, McLaughlin adds delicious wah-wah guitar, while the band members trade a seemingly endless barrage of solos. Billy Cobham gets a showcase in the middle, beginning smoothly and continuously escalating in both speed and dynamics, preparing one for the explosive second half of the piece. When the group launches back in, playing in 13/8 time, continually increasing in speed, McLaughlin, Goodman, and Hammer all blaze away in a manner that is nothing short of telepathic. Beneath all this, Laird and Cobham anchor things, while contributing to the overall searing effect. As great as the early performance was, this is even more inspired.

After all the fury that occurred during the previous piece, "Sanctuary" provides some tranquility to the proceedings. Jan Hammer's introspective synthesizer solo weeps while Goodman's wailing violin compliments McLaughlin's guitar. This segues into a lengthy heavily improvised version of "The Dance Of Maya." There are many moments of brilliance here, but what stands out overall is that the group is having a joyous experience performing this composition. Following the initial theme, the rhythm section drops out completely leaving the remaining trio. The interaction between Goodman's pizzicato violin, McLaughlin guitar and Hammer's electric piano is full of a humor and playfulness that is absolutely delightful. Cobham and Laird eventually join back in and after a few surprising stop/starts to jolt the audience, they launch into a cosmic jam with Jerry Goodman as the primary pilot. Eventually, McLaughlin rips into a pulverizing solo with Billy Cobham in tow. The unison playing here is thrilling. Despite McLaughlin's blazing speed and unpredictability, Cobham never misses a beat—another mind-blowing display of musical telepathy. This eventually becomes a delicate call and response with Hammer adding his gurgling mini-moog embellishments, before all converge and reinstate the song's themes before bringing it to a close.

To fully pummel the audience into submission, they close the night with a ferocious encore of "Vital Transformation." In 9/8 time, this contains some of the most furious playing that the band would ever achieve. Charismatic, powerful and blazing with energy, this blends all the elements that comprised the bands music; jazz, rock, funk and R&B condensed into six minutes of pure power.
Posted by Zen Archer at 3:04:00 AM