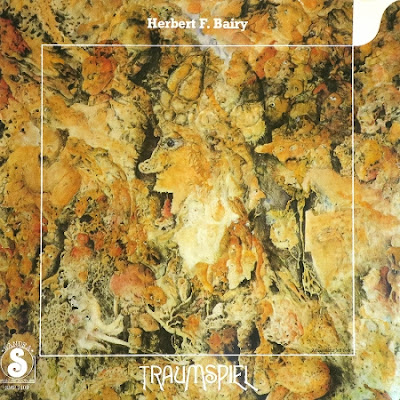 Herbert F. Bairy is the pseudonym of Ferdinand Försch, German musician and sound sculptor born 1951 in Bad Brückenau. In 1980 Ferdinand released one album under the Herbert F. Bairy name, Traumspiel. Recorded in 1979, Traumspiel is a wild album, composed of loud and avant-garde jazz and fusion, Indian and raga music influences, and trippy lysergic folk and electronics. A true forgotten cult album.

I have never come across an album that so effectively conveys it's title like Traumspiel does, or Dream-game to you English speaking folks out there. There is a deliberate dream-like veil pulled over every peep and musical gesture uttered herein - be that the rather flickering way the record goes from one piece of music to another, or the manner in which the different instruments are being played. It's the very essence: dreams, no matter how bonkers and bizarrely astral they may appear. It's the red thread running through this album like an enigmatic sleepwalker telling mystical stories of old. I throw this record on the stereo and thousands of lysergic images zap through my head in an up-lit highway of movie scenes from Kubrick, Lynch, Aldomóvar, Gilliam and, perhaps most noticeable, Alejandro Jodorowsky - with the esoteric expression found on Traumspiel forever reminding this bewildered listener of the breathtaking climax of 'Holy Mountain', where the thief tumbles down the rabbit hole of dreams, Carl Jung and his own subconsciousness.

The music can loosely be described as a strange meeting between the Atom Heart Mother suite, Shakti and an album I never thought I would be drawing a parallel to, Clivage's Mixtus Orbis. A record notorious for not sounding remotely like anything else.

Starting off with the title track, Traumspiel lures you into the dream with howling wind effects sounding like they're steaming out of a synthesiser, what sounds like wind-chimes and this eerie female vocalisation which comes incredibly close to mimicking a theremin. The surroundings start quivering and you are served with fizzy electronics and vocals that seem to have been lifted straight out of a Sergio Leone movie. With the additional cello, zither and ominous organ bursts joining in - my mind instantly thinks Ennio Morricone only he's directing the soundtrack to a pirate movie set in India. The feel is far away from being jolly though as the music intensifies and starts biting with some seriously snarling grunts from the cello. At this time I vividly picture a good dozen slaves sitting beneath the deck of the ship, banging away on tin cups and cutlery. Though what may seem crude in description defies belief. This is not only Long John Silver's long lost Indian theme but infinitely more than that - when these beautiful wavering female vocals start to swoop around. This is truly mermaid music, if I've ever encountered such a thing. In dives a clean sounding electric guitar and katjing we're finally treated to rock with drums, funky piano and bass lines and most importantly that guitar soloing away. Abruptly, and quite telling of Traumspiel itself, the music subsides and somehow gets diverted into a haze, where everything feels gelatinous or like a dream set in a treacherous forest. The track ebbs out and you feel like you just ran the marathon. Wheeew what a way to start an album!

Alright, next up comes Lady Ollala and with her 14 minutes of glacial drones, Eastern rhythmical phrasings a la Krautrockers Between, and a very delicate form of psych music that I dare not describe in words, as they might dissolve in the midst of my typing. This may just be my fave on the album, which probably also is why I have such a hard time describing the music. I always imagine snakes dancing to the wavering and bobbing Lady Ollala, only with a raw and ancient sensuousness underlining everything - ultimately throwing a beautiful Indian woman with fiery red eyes into the midst of the serpents. This is a dream.

Is it really? Oh yes, and you're reminded for the last time with the ending Red Peter's Dream as electronic and ritualistic segments of music ooze in and out of each other - perfectly capturing the illogical movements of our dreams and why you sometimes feel as if you're several places at once and that big black holes are travelling through your body like being pierced by a sea-slug and that the very lines separating your dreams from real life blur and turn misty, trade places - move about in order to tell you something...something that you can never explain to other people, only really fathom when you play music like this.