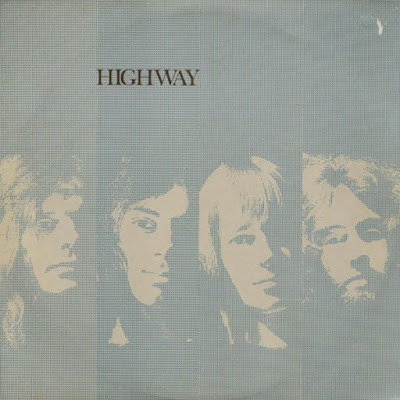 Such was the way of the music industry in 1970 that Free were back in the studio on August 21st barely a few months after the release of the "Fire and Water" album to begin recording the follow up "Highway".

Through the first three albums they had built up a solid reputation as a hard working solid blues rock band. For each of these albums the songs had been written and honed on the road, so much so that the entire previous album was played live at some point or another in the year of its release. That wasn't the case with "Highway" though and for the first time the band were forced to write in the studio. The irony of this is that the recording of the second and third albums had been frought with difficulties as the band disagreed with record company people and producers alike despite having the material all prepared. "Highway" though had none of these problems and was generally regarded by the band as the easiest to record.

There is a marked change in styles again on "Highway". Just as "Tons of Sobs" had been very bluesy, "Free" very folky (even though Paul Rodgers claimed it to be a soul album) and "Fire and Water" very rocky, "Highway" was drenched in melancholy, soul and even tinges of country and southern boogie. With far more piano than on previous albums "Highway" is certainly the softest of the Free albums although this does give added punch to the harder Free rockers on there.

The album starts with the curious 'The Highway Song'. Curious in subject matter anyway,  for you don't get many rock songs about farming. Okay so its only loosely based on farming but you get my point. A nice mid paced piano and drum shuffle it sets the tone for the album and casts thoughts of lazy summer days. The idea behing the song is said to have come from Rodgers' love of "Music From The Big Pink" by The Band.

'The Stealer' was the single and supposed successor to 'All Right Now' and is one of the two real out and out rockers on the album. A great strutting piece of classic Free it is still a mystery to many as to why it bombed so terribly as a single. Lyrically it is not dis-similar to 'All Right Now' but it does lack the latter trademark solo and bridge so is musically inferior. Which makes the decision to use the single edit on the album even more surprising. There is a great "extra Koss" version which is now available which extends the song by over a minute and is virtually all Kossoff guitar. Quite why this wasn't used at the time is beyond me. Incidentally when this was recorded, on first take at 3AM in the morning engineer Andy Johns woke Island boss Chris Blackwell and demanded he come and listen to it straight away as it was a surefire hit. Luckily for Johns Blackwell agreed with him, unluckily for Free the record buying public didn't and it never even charted.

'On My Way' is a lovely mellow track which is a great vehicle for Rodgers' voice and the Kossoff guitar. It leads perfectly into 'Be My Friend' a beautiful brooding cry for love which Kossoff maintained was the best thing they ever did. There is far more guitar on the live versions due to the lack of piano in a live setting (Andy Fraser played bass and piano in the studio) but Kossoff still turns in an impressive performance especially as the song builds. 'Sunny Day' though is possibly one of the two weaker cuts on the album along with the even more countrified 'Bodie'.

The second out and out rocker on the album is 'Ride on a Pony'. A dirty classic Free riff that just leaps out of the speakers and grabs you by the throat. The song just stunts along throughout its entirety. Nowhere else is the description of Free's sound as "four flat tires on a muddy road more apt". It has long been my favorite Free song, is still my ringtone on my phone and once led to me sacking a guitarist on the spot for declaring it boring and refusing to play it as an encore !!! One strange little thing about the song is that no-one seems to actually have the definitive answer as to what it is really called. It has appeared and been introduced live as 'Ride on a Pony', 'Riding on a Pony' and 'Ride on Pony'. 'Riding on a Pony' would be the obvious choice as those are the actual lyrics but the original album used 'Ride on a Pony' and the "Free Live" album used 'Ride on Pony'. Fact of the matter is whatever you call it its one blinding rock tune and along with 'Be My Friend' became a staple part of the live set even before the album was released.

Two more brooding bluesy love songs with soul tinged vocals make up the album. The tremendously melancholy and heartfelt plea of 'Love You So' which will doubtless trigger many a personal memory in every listener and the lonely despair of 'Soon I Will Be Gone' which closes the album.

For some reason "Highway" did not reach the dizzy heights of its predecessor sales wise and it has become something of Free's forgotten album. For me at times I think it is their best. Sometimes "Fire and Water" just edges it. Whatever, one thing for certain is that never again will a band record and release two such classic albums in the same year. By the time "Highway" hit the streets Free were fast disintegrating as Rodgers, Kossoff, Fraser and Kirke developed as musicians and men, they were all still ridiculously young at the time. However there was still many a twist and turn for those flat tires to negotiate on that muddy road.