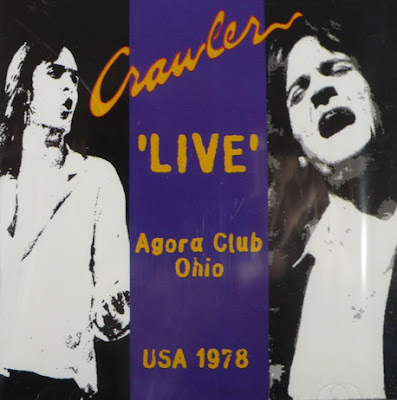 This live recording at the “Agora Club” from 1978, was the first-ever band authorised live album.

CRAWLER rose phoenix-like from the ashes of Back Street Crawler after Paul Kossoff's untimely death. They made two excellent albums and toured extensively through 1977/8 giving consistently first-rate performances. The first self-titled album went silver in the US and spawned the AOR radio hit 'Stone Cold Sober'. Appearances on 'The Old Grey Whistle Test' and 'Rock Goes To College' also established them as one of the better bands from this period.

The line-up was enough to make any rock fan's mouth water: John 'Rabbit' Bundrick had been with Free, released two very good solo albums of his own, and appeared on enough sessions to make anyone's head spin. Paul Kossoff had personally chosen Terry Wilson Slesser to front Back Street Crawler out of numerous candidates. He had come from Beckett who had a great debut sucked under when their label folded. Terry Wilson (no relation) and Tony Braunagel formed a watertight rhtyhm section and had been playing together in various guises since the early 70s, initially with a band called Bloontz. The final member, and Kossoff replacement was the excellent Geoff Whitehorn. Guitar player extraordinaire Whitehorn had served a fine apprenticeship with If before joining up with Maggie Bell. More recently, Geoff has been Paul Rodgers' regular guitarist.

Crawler was one of the most consistently solid live bands around. performances were never less than excellent.This Angel Air release is the first-ever band authorised live CD.