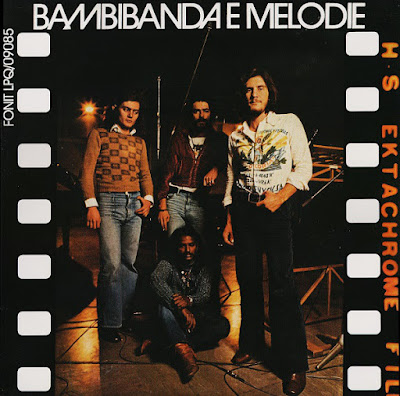 In 1974 a new incarnation of GARYBALDI was formed by Bambi Fossati along with old cohort Maurizio Cassinelli, bassist Roberto Ricci and indian percussionist Ramasandiran Somusundaram as BAMBIBANDA & MELODIE. Their only album has the usual leading role for Bambi's guitar, but the use of percussion gives a more latin-inspired feel that sometimes reminds Santana.

Percussionist Ramasandiran Somusundaram, previously active as session musician, also released an album and no less than three singles (in a more commercial vein) between 1974 and 1976 on the Magma label.

Bambi Fossati kept playing under the name of BAMBIBANDA for some years before reforming the old group in late 80's with a new line up including Marco Mazza (guitar) and Carlo Milan (bass) along with Maurizio Cassinelli, and they released an album, more song-oriented, in 1990, as Bambi Fossati & GARYBALDI.

It´s incredible how broad this scene is, and how it just keeps unfolding itself before you. When you think you´ve got it pinned down, it spits out another gem that makes you think twice about the true nature of the music. It´s symphonic, no wait a minute it´s eclectic - or maybe it´s more heavy based? The fact of the matter is, that it´s a very shifting and varying scene that boasts nearly every category featured here at PA. This album is no exception, as it sports a very uncharacteristic approach to the scene, but still retains its bond to RPI through melody, heart and soul.

Bambibanda E Melodie is a wonderful new experience to me, and one I hadn´t quite prepared myself for. Recently I´ve been listening a lot to Krautrock and some of the more out there electronic artists, and here the other day whilst teasing my cat with a piece of bacon, I found this record hiding underneath a commode collecting dust. It had been quite a while since my last listening, and I immediately popped it on the stereo. A far cry from the freak out records that´s been playing at my apartment the last couple of months - no doubt, but a much needed change. I had almost forgotten the sheer pleasure of being lured into ecstasy by butter instead of sandpaper and gravel.

In describing the music within, I find it almost impossible not to make references to the smooth and Hispanic rhythm based fusion of Santana. But the comparisons stop there, as Bambibanda E Melodie sounds much more melody driven and laid back. It´s music you put on, when you´re out on a moonlight drive, or going for a swim in a calm and quiet lake, where the waters nestle around you like a longtime fluid friend. From the beautiful guitar work that very melodiously leads these pieces in between bluesy wails and smooth jiving riffing, - to the tight percussion section that never tries to break the image of the aforementioned midnight swim, - this album makes you smile with conviction and relaxes you like an early morning blowjob in the shower.

Although this album only sports one guitarist, it sure sounds as a twin-duo cooking up solos that intertwine themselves as well as juxtaposing each other - and always at the right moments. Like Santana, the melodies seem to come from out of nowhere, but they are there, and rely mostly on a single guitar string at a time. Again there´s an overwhelming smooth texture attached to it, that conveys the image of a musician who´s taking his time - waltzing with the morning light. A thing he obviously enjoys together with the bass player here, who is the booming proof that the bass can be a sensuous instrument.

I guess the only thing about La Bambibanda E Melodie´s sole record that seems out of place, is the sparsely used vocals. Normally I turn to RPI for a dose of what might be the most beautiful language outside Portugal - sung with vigor and warmth that´ll break through the hardest of nutcases, but not on this release. They are a bit flat, and sound like they belong to an indecisive hangover. On the other hand, the vocals here take up about 1% of the experience, and you nearly forget about them as the music plays it´s buttery tribute.

If you´re into the fusion part of Santana´s output and just can´t keep still whenever the congas starts their hypnotic and persuasive ode to the first simian invention - the beat - you ´ll want to check out this wonderful album. Warm and smooth like a woman´s breast bathed in orange sunlight.

After the breakup of Garybaldi, Bambi Fossati decided to form a group together with musicians from Genoa, with whom he had jammed in 1974. The group was composed of, besides Fossati, another ex-Garybaldi member Maurizio Cassinelli, bass player Roberto Ricci and Indian percussionist Ramasandiran Somusundaram (also a featured session man with French prog band Magma on several of their singles). At the end of 1974, this quartet recorded an album called “Bambibanda E Melodie” for Fonit Cetra.

The principal instrument here is obviously the guitar, but the great “vibes” happening between the two percussionists are also making a distinction. This album is distinguished by a very rhythmic rock orientation; the lyrics are reduced to a minimum, while the music flows fast and direct due to the overall spontaneity of the concept. Not typical Italian symphonic rock of the era, mainly jazz/fusion oriented.

Bambibanda continued their live activity for several years, however, without producing any more recordings.
Posted by Zen Archer at 1:08:00 AM