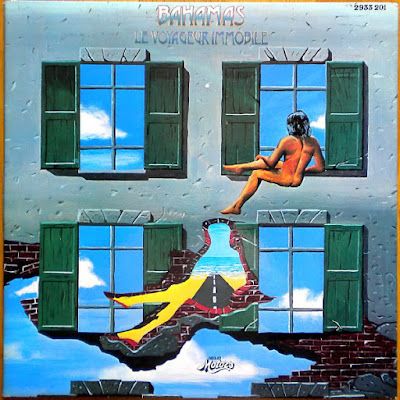 Bahamas was a short-lived French group from Paris, which released one album for Polydor and that's because the musicians involved were all members of famous singer's Christophe backing group.These were Patrice Tison on guitar, Didier Batard on bass), Dominique Perrier on various keyboards and Roger Rizitelli on drums.Their sole work ''Le voyageur immobile'' was recorded at Studio Ferber in Paris and came out in 1976.

Despite an exotic-sounding name, Bahamas' music was fairly rooted on what was musically going on in the country around the time and considering the facts of the local Rock music scene.They seem to be based on the instrumental qualities of legendary groups like ATOLL or ANGE and combine them with elements of French Pop and Singer/Songwriter stylings.It's not accidental that they were the same guys supporting CHRISTOPHE in his most proggy effort ''Samourai''.Of course this is not a high quality Prog Rock LP, it has a rather confusing sound, which doesn't settle somewhere and goes all over the place, borrowing elements from Fusion, dramatic French Prog and sugar Pop.The instrumental lines are pretty decent, led by the varied keyboard work of Perrier on electric piano, organ, acoustic piano, but mainly built on synthesizers, while when the guitar jumps in the album obtains some sort of Symph Fusion flair, even if not very close to some of ATOLL's monumental passages.Very spacious, flashy and quirky keyboard lines with a good and solid support by bass and drums.The vocal moments come from  a different story.They are offered mainly in a sentimental or melodramatic mood, typical of a French singing romanticism.Anyway, these are too few to dominate the album and ''Le voyageur immobile'' is fairly driven by both laid-back and more tricky instrumental parts with symphonic, jazzy and poppy leanings and an apparent pre-Neo Prog taste due to the consistent use of synthesizers.

By 1977 Bahamas were history, but all members had decent musical careers.Perrier and Rizzitelli found the Electronic duo Space Art, Perrier got involved also in a similar-sounding project in the 90's, called Stoned Age.Didier Batard worked for several years as a session musician, same luck for Patrice Tison, who even made it to the supporting group of famous Canadian singer Celine Dion.

Decent amalgam of French Chanson with synth-dominated Classic Prog and Fusion.Not among the priorities of a prog fan, far from trully compelling, but definitely a work to be included in the list of 70's unknown proggy efforts.
Posted by Zen Archer at 11:59:00 PM