Badfinger
1974
Wish You Were Here 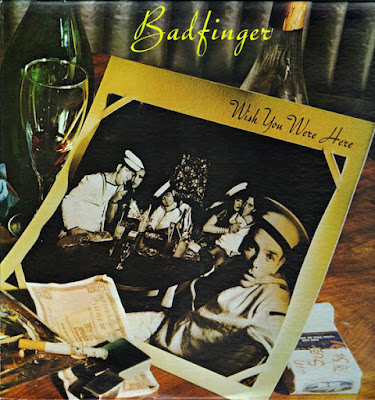 Badfinger's second album for Warner Brothers was recording during two sessions - the first took place at The Caribou Ranch, Colorado in April/May 1974; the second at AIR studios, London in June. Though financial worries had begun to have great influence on the 4 members; they all felt that they had to put everything they had into these recordings. And this really shows on the album - another masterpiece - one of the really great albums of the seventies. It has been called "The Sergent Pepper of the 1970's"; personally I feel that it has more in common with "Abbey Road".

Badfinger had grown into an albums-band, and this album really works as a whole, especially the original side 2 which features two very successful medleys. The album opens with Pete's very powerful Just A Chance and with Mike's light and catchy You're So Fine song by Joey and Pete - once again Mike proves himself as a competent songwriter. Joey's Got To Get Out Of Here really shows how Joey felt about about the music business and being in the band ( as we know he left shortly after the album's release) a very strong song by Joey. Know One Knows is another powerful melodic rocker by Pete - I love the Japanese voice that meddles with leadguitar part. The first side closes with another grand production which characterizes most of the album; Pete's Dennis written to his step-son. Besides the two medleys side two features Tom Evans' King Of The Load ( one of my favourite Tom Evans songs) and Joey's quiet Love Time. No singles were released from the album; this was a period when hit-singles didn't matter much to the progressive/ambitious bands. Just a Chance or Know One Knows might have been able to make the charts with the right promotion, though none of them have immediate hit-potential.
Posted by Zen Archer at 7:13:00 PM