Bad Company
1976
Run with the Pack 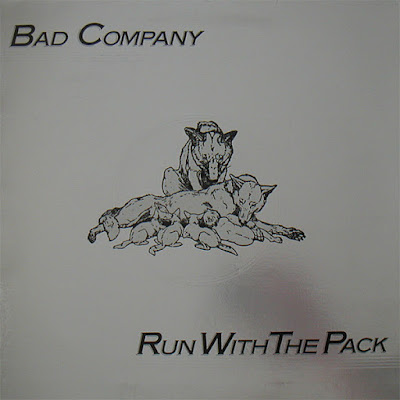 Recorded in Grasse, France, September 1975 with The Stones Mobile Unit

The heavyweight collosus of a supergroup that was by now Bad Company trundled into the fragrant town of Grasse on the French Riviera in September 1975 with the Rolling Stones Mobile Truck in tow and recorded their third album 'Run With The Pack'.

By now the two years of constant touring was begining to take its toll and the songs on here are in places a little jaded or even ordinary. Despite a number of good cuts ultimately 'Run With The Pack' suffers due mainly to there being no hit in the form of 'Can't Get Enough', 'Good Lovin Gone Bad' or 'Feel Like Makin Love' from the earlier albums. However, it is rescued by some classic 'album tracks' which on the whole converted well to the live set.

The album kicks off with 'Live For The Music' which is in truth a pretty ordinary affair and comes nowhere close to emulating the earlier album openers. Even in a live setting this track struggled to make any sort of impact and was soon dropped. The following 'Simple Man' though is a classic peice of Bad Company blues country tinged ballad. It is almost 'Ready For Love' part two. 'Honey Child' is more akin to the 'Good Lovin Gone Bad' formula but failed to make any significant impact when released as a single. It did, however, work well in the live set. The first of the slow ballads 'Love Me Somebody' is another ordinary song but is saved by Rodgers excellent, as ever, vocal. The title track is a piano led mini epic with a great string arrangement to fade by Jimmy Horowitz who had also been used on the previous album.

Side Two of the vinyl issue kicks off with 'Silver Blue and Gold' another piano led track and one that has grown with time and is now regarded as one of the bands best songs. It still features in both Paul Rodgers solo shows and Bad Company reunion gigs. For the first single Bad Company recorded a version of The Coasters track 'Young Blood' which personally I don't like at all although it did manage to get to #20 in the US singles chart. Almost comedic in places it does not sit well for me amongst the rest of the album and maybe it would have been better released as a non album single or something. It certainly brings down the overall quality of the album and I was totally amazed when they played it live at the recent reunion shows especially given some of the far better tracks they omitted. The campfire singalong 'Do Right By Your Woman' is next and although it is by no means a classic it sounds like it in context to the previous track! Originally a version was going to be used that had been recorded around a real outdoor fire but the crackling of the wood was too loud so it was discarded and another studio take was used instead. The original, with crackles, version can be found on The Original Bad Company Anthology. Another Ralphs penned hard rocker 'Sweet Lil Sister' nods again towards the power of the previous years 'Straight Shooter' before the melancholy country ballad like 'Fade Away' closes the album in classy style.
Posted by Zen Archer at 1:15:00 PM