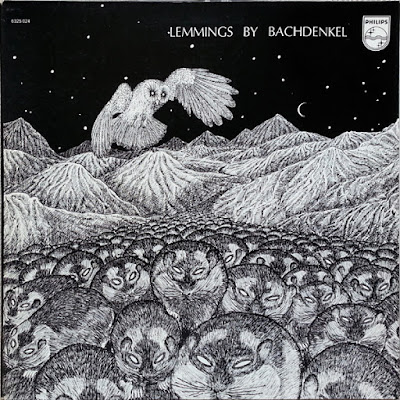 
BACHDENKEL was an English rock band that started under the name "YOU KNOW WHO" in 1968. The three piece consisted of bandleader Colin Swinburne on vocals/guitars/keyboards, Peter kimberley on bass/piano/vocals and Brian Smith on drums, with Karel Beer as additional musician, lightening engineer and producer. The band moved to France to live, perform and record.

In the 10 years of excistence BACHDENKEL only recorded 2 albums, the first album "Lemmings" was recorded in 1970, but wasn't released until 1973, the second album called "Stalingrad" (in cyrillic letters) was recorded and released in 1977. in the mean time BACHDENKEL toured small venues through europe (mostly France).

BACHDENKEL started as a Flower Power psychedelic rock band (Pink Floyd, Soft Machine, Beatles, Procol Harum), but developed towards a more symphonic/melodic progstyle for their second album. Their sound is dominated by guitar and drums, with great vocals and occasional keyboard passages.

The band wasn't (and isn't) well known, but that doesn't lesson the experience and thrill you get when listening to their music. The 90's revival of prog resulted in some aknowledgement to their music, and Bachdenkel re-released their two albums on CD, with additional, mostly unreleased, material. Those CD's are very much recommended, also because the additional songs are practically as good as their previously released 'forgotten' masterpieces.

With an adventurous story on their backs, Bachdenkel from Birmingham, UK, evovled from the Psych group U No Who in 1967 with guitarist/keyboardist Colin Swinburne, singer Peter Kimberley, drummer Ron Lee, bassist Dave Bradley and a second singer named Terry Hidland.Slowly developing a cult status within the city's borders, Bachdenkel were among the greatest lesser known Psych/Prog bands of the country, eventually settling in France in late- 60's reduced to a trio of Swinburne, Kimberley and drummer Brian Smith.Between June and August 1970 they recorded their debut ''Lemmings'', but at the time there was no interest by a label to release it.Three years would pass before Phillips gave a shot to Bachdenkel's debut.
The album has a more than evident late-60's British Psychedelic Rock flavor all the way, but comes as a mix of shorter Psych Rock tracks with occasional harder moments and longer, more developed compositions in a Proto Prog/Psych Rock style.While not particularly complex, the album shows hints of a more demanding musicianship in the trend of the time, yet the short tracks retain more of an early-60's mood and a bit dated Rock style with sensitive vocals, strong guitar movements and powerful drumming, while sometimes even some BEATLES-like melodies pop up here and there.However there is a certain attempt by the group on the longer ones to come up with a more inventive sound.Dynamic guitar workouts, heavier use of organs and changes between mellower vocal moments and heavier guitar-based passages, but again the psych elements remain in the forefront.

The Ork Records CD release seems the more attractive of all the album's reissues, featuring three bonus tracks Bachdenkel recorded around the time in a similar vein as with ''Lemmings'' tracks, while there are three extra tracks from the band's late-60's days (among them an early version of ''An Appointment With the Master'') in a great, powerful Psychedelic Rock style, confirming why Bachdenkel were among the most talented groups of the age.

Good and passionate Psych/Proto Prog Rock with an intense British flavor.Fans of the sound will simply love this, but moreover it is recommended to check out ''Lemmings'' for its inner strength and well-crafted atmospheres.
Posted by Zen Archer at 2:13:00 AM