Mahavishnu John McLaughlin - 1971 - My Goal's Beyond

Mahavishnu John McLaughlin
1971
My Goal's Beyond 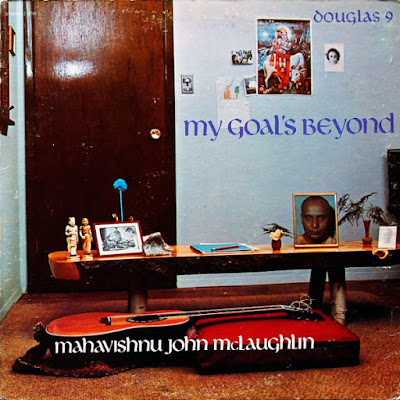 Technically, the acoustic guitar playing on 1970's My Goals Beyond does not approach the skill exhibited on most of John McLaughlin's recordings. Flubbed notes pop up here and there, and although this album is famous for McLaughlin's "solo" renderings of such classic tunes as Mingus' "Good-Bye Pork-Pie Hat," Bill Evans and Miles Davis' "Blue in Green" and his own wonderful composition "Follow Your Heart," Mclaughlin actually pre-recorded the chords and soloed over them.

However, no small amount of flubbing or overdubbing can take away from the fact that this album is a true masterpiece. MGB set standards for acoustic guitar playing which remain today. McLaughlin's soloing and chord playing was a revelation even to those familiar with his electric guitar style. He snapped the steel strings with the confidence of a warrior. His playing was amazingly fast, yet still melodic, and his tune selection was unusually eclectic. He was coming from an entirely new place.

The most impressive performance is the ensemble rendering of McLaughlin's "Peace One." Charlie Haden opens the composition with an infectious bass groove, and the tune features crisp, snapping acoustic guitar and Far Eastern tonal colors. Dave Liebman is especially up front on sax. Other members of the band included future Mahavishnu Orchestra band mates Billy Cobham and Jerry Goodman. Airto and Badal Roy also come along for the joyful ride. Violinist Goodman, in particular, makes some very strong statements.

So popular has this record become over the years that several labels have purchased it from catalog and re-released it. You can't kill this thing with a stick. In addition to the original Douglas 9 production, MGB has also appeared on the Warner-Electra, Ryko and The Knitting Factory labels (the latter being its latest reissue, from 2000).

MGB is considered to be a milestone in the career of John McLaughlin and the history of acoustic jazz guitar. To this day, there are many who claim it is still the greatest of all McLaughlin records. I recommend listening to this record once a month for the rest of your life.

We shouldn't forget that it took guts to record an acoustic guitar album during the times of Led Zeppelin and Jimi Hendrix. So although over the years the album has sold well through reputation, it totally bombed when it was released.

This would McLaughlin's last solo album before the release of Electric Guitarist in 78, as Mc will have two group projects, first the Mahavishnu Orchestra, then Shakti. And this album actually has some ramifications in both projects: MGIB is the album where McLaughlin meets violinist Jerry Goodman and drummer Billy Cobham (both members of MO) and most of the second side shows the tastes McL has for Indian music, something he will delve in with Shakti.
MGIB comes with a stellar cast of supporting musicians, but weirdly enough, he doesn't need them for the whole of the first side, as it is strictly acoustic and a solo performance (some Gong banging on two tracks). A series of 8 guitar pieces, half of which are covers of jazz giants such as Mingus, Corea and Miles interspaced with three original tracks, fill up the first half of the album and no matter how well executed, they are pretty well sleep-inducing, aside in the superb Song For My Mother (and profits for his guru ;-) and the excellent Phillip Lane, both being McLaughlin compositions, filled with fiery guitar lines; the third Follow Your Heart completing the podium.

The flipside is rather different (if you forget the Miles cover), with two lengthy tracks totalling almost 20 minutes, both of them delving into Indian classical music and driven by solid raga beats. The first piece of Peace (I know, toooo easy ;-)) is a killer track slowly evolving from an acoustic fusion jazz, where only Malahakshmi's sitar give an Indian sound at first, but the track slowly morphs into a raga (tabla drums slowly appears), with Liebman's flute adding a magic touch, soon relayed by Goodman's violin. By mid-track, the song had veered into a full-blown raga, but the musicians manage to return to the original acoustic jazz-fusion. The second instalment is almost as equally impressive, Liebman's saxello, Goodman's violins taking the forefront. In both tracks, McL could've added some fiery guitar lines, but chose to remain discreet.

As usual with McL's solo albums, MGIB is a bit of a pot-pourri, but certainly less so here than in later 70's solo ventures. Soon McL would take Cobham and Goodman with him and found one of jazz-rock's most stupendous JR/F groups Mahavishnu Orchestra over the next five years with two different line- ups. While I wouldn't call this album even close to essential, compared to MO's oeuvre, MGIB does merit its fourth star, principally on the strength of McL's compositions, crushing the covers, no matter from whom they are.
Posted by Zen Archer at 10:00:00 PM