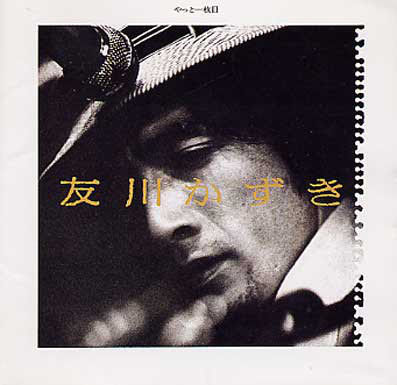 Poet, singer, artist, bicycle race commentator, essayist, actor, drinker.
An artist who miraculously embodies the romance of the vagabond poet, a rarity in an age where our very freedom means we have forgotten how to live.

Born in Hachiryu-mura (now renamed as Mitane-machi), Akita in northern Japan on February 16, 1950, Tomokawa’s real name is Tenji Nozoki. He was brought up by his grandparents, surrounded by the lush nature of the Mitane River which flows into Lake Hachiro. During his years at Ukawa Middle School, Tomokawa was a notably poor student and displayed no interest in literature. However, by chance one day in the library he came across the poem Hone (Bone) by the early 20th century Japanese symbolist poet Chuya Nakahara. This poem shocked him to the core, and he started writing his own verse. After leaving middle school, he entered Noshiro Technical High School, a school famous for its basketball program. While managing the school basketball team, he read widely – devouring books by the likes of decadent novelist Osamu Dazai and noted literary critic Hideo Kobayashi. (He later coached the team for a while, one of his students going on to represent Japan at the Olympic Games).

Inspired the example of Bob Dylan and others, the early 1970s in Japan witnessed a boom in folk music. Tomokawa found himself caught up in the movement, taught himself to play acoustic guitar and began to set his poems to music. In 1975 he made his long-awaited record debut, releasing the album yatto ichimaime (Finally, The First Album). Around this time he got to know the members of the radical Japanese rock band Zuno Keisatsu. He got on particularly well with the group’s percussionist, Toshiaki Ishizuka, who would go on to become one of Tomokawa’s most important musical collaborators. In the late seventies, Tomokawa would become heavily involved with several theatre companies, writing songs for their plays and even appearing on stage as an actor. This was a period when he seemed to seek ever new spaces into which to expand his creativity. It was also during this period that he first became interested in art.

Tomokawa held his first solo show in Tokyo in 1985, with the support of the art critic Yoshie Yoshida. Since then he has had shows all over Japan, and has attracted the attention and praise of artists and opinion-makers like the outsider author Kenji Nakagami and the poet Yasuki Fukushima.