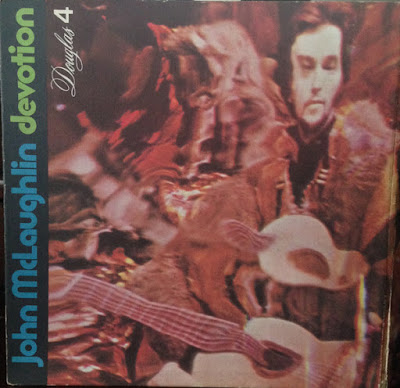 Originally released in 1970 but re-released regularly since, Devotion is a hard driving, spaced-out, distorted hard-jazz-rock album featuring organist Larry Young, drummer Buddy Miles, and the little known bassist Billy Rich. This album was recorded close to the period when McLaughlin had been jamming with Jimi Hendrix, Young, Miles and Dave Holland. Terrible bootlegs exist of some of their jams, but bad sound quality and McLaughlin's guitar on the fritz make the bootlegs a ripoff.

Devotion was also sort of a ripoff. To this day, McLaughlin is angry about the way former Hendrix producer Alan Douglas mixed this record. Apparently, Douglas spliced bits of music together here and there that were not supposed to be connected. Despite this obvious problem, and the fact Douglas paid McLaughlin only $2,000 to record both Devotion and My Goal’s Beyond , this album is chock full of wonderfully ominous riffs and sounds. Devotion is an overlooked landmark album.

“Marbles" opens up the album and is truly an early fusion masterpiece. (Some CD reissues of Devotion have changed the order of the tunes...don't ask why). The catchy hook is infectious. Years later, McLaughlin would employ the same riff often while with Shakti. You should also check out Santana’s cover version on his hard to find album with Buddy Miles, Live.

McLaughlin focuses more on tension and dynamics than on speed, and Larry Young plays mysterious and otherworldly chords. Miles keeps a constant thud-thud-thud churning throughout and Billy Rich effectively doubles McLaughlin’s themes. No slow ballads. No pretty melodies. This is just pure unadulterated jazz-grunge. Those familiar with the Mahavishnu Orchestra will enjoy picking out the passages that would later become signature tunes. Devotion is awfully messy at times, but you won’t mind cleaning up afterwards.

Do you ever get the feeling some albums are simply a free for all for shady and less shady labels? I have seen this album released in at least a dozen different versions on some of the most dubious label with different artwork, none fitting the original one. And of course as you'd figure when such is the case, the Charly label is involved, and it is the version I have, graced with a picture of John in the mid-80's. This is really a bit sad because this album is a real scorcher, one of the rockier releases of McLaughlin's lengthy career.
And believe me, when I say scorcher (but not flawless), this is a real one keeping in mind that we are in the jazz-rock mould, but sometimes it sounds like jazz-metal. John has assembled a stellar cast around him including Buddy Miles (Santana, Hendrix etc.), Larry Young (the great organist in Tony Williams' Lifetime, whom he hooked up with after his two album stint with them) and lesser-known Billy Rich. Jerry Goodman (ex-The Flock and future-MO) is also helping out after the previous My Goal's Beyond. But these guys rock your brains out even if there are some lengths. This album comes also after the two albums he'd done with Miles Davis (Bitches Brew and Tribute To JJ). However at the speed these guys were recording albums (three solo for McLaughlin this year, plus his other projects), there are some misses and the messy (shoddily recorded) Siren is just one example. A torrid piece, but wasted by inappropriate recording.

Tracks like the 11-min+ title track are awesome in its power and tension and not a second is wasted. Clearly on all tracks, virtuosity is the key word, but no one commits the blunder of indulgence either and the whole group maintains a much-needed tightness when this type of music is recorded. If Dragon Song is yet another hard-driving guitar track, the following Marbles is a more reflective one where Young's organs plat first role with McLaughlin's lightning fast guitars having trouble to surface, but the interplay between the two is awesome. The rest of the tracks are still of the same calibre of the first few on the first side of the vinyl.

I have heard some purists dismiss this album as a collection of jams (some of the song's abrupt ends and sudden shifts give this theory some credibility), and if such was the case, these guys were among the bests ever. McLaughlin's next step was to form the superb and famed Mahavishnu Orchestra, which would keep him occupied for a while. But while this album is miles away from MO, it is no less essential for McLaughlin fans.
Posted by Zen Archer at 9:49:00 PM