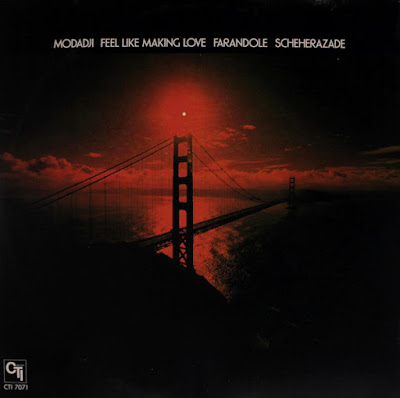 
I first heard this album on a flight from LA to NY back in August 1977, and soon thereafter purchased a copy at the local record store (yup, vinyl was still king back in the mid-'70s). This live recording of jazz fautist Hubert Laws with the SFSO was captured very well -- it has a good mix of ambient and direct micing, so you get a sense of the room as well as Hubert's flute and the orchestra.

Now I'm a guitar player and I must confess that I don't listen to a whole lotta flute music. Back in 1977 I was listening to alot of LA studio session players' solo albums, like Lee Ritenour's "Captain Fingers," Larry Carlton's many sides with The Crusaders and Steely Dan, and Robben Ford's "The Inside Story." What I am trying to say is that, you'd think some guitar dude would be the least likely candidate to enjoy an album of Hubert Laws with the SFSO, but the truth is the exact opposite. This is a great album of music, with solid arrangements, and a remarkably nice "fit" between the jazzier Laws and the more classical SFSO.

The tune that captured my attention first was Laws' interpretation of Roberta Flack's classic "Feel Like Making Love To You;" Hubert's endlessly creative embelishment of the melody is truly a thing of beauty. Laws can swing hard or he can swing more gently, but he always has at least a touch of swing in his playing, even on the classical-sounding "Sheherezade."
Posted by Zen Archer at 10:34:00 PM