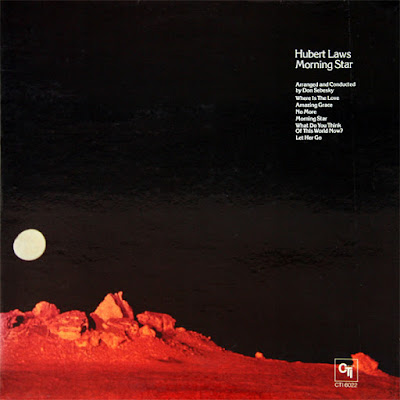 
After the success of 1970's Afro-Classic, Hubert Laws re-teamed with arranger/conductor Don Sebesky for 1972's Morning Star, his third date for producer Creed Taylor's CTI. Laws' sidemen for the date included Ron Carter on bass, Bob James on electric piano, Billy Cobham and Ralph McDonald on drums, guitarist John Tropea, and vibraphonist/percussionist Dave Friedman. Rather than follow up Afro-Classic with another program of primarily classical numbers, Taylor, Laws, and Sebesky employed a large string, wind, and brass ensemble and went to the pop-jazz side of the spectrum. The title track of this gorgeous set is a laid-back, lilting jazz tune with Laws' flute introducing the melody, followed by a tight, economical yet lengthy and expressive James solo and the winds flowing in momentarily before the brass explodes into a gorgeous swing before disappearing again very quickly. James' solo flows through both beautifully. Laws' own break is impressionistic, yet full of elemental swing and classical flourishes. On the beautifully textured reading of "Where Is the Love," Laws' flute plays and darts soulfully around the melody as James colors the margins and Carter ushers in a groove change with his diligent lines accenting Cobham's backbeat. The strings, sweet as they are, underscore rather than overpower the band, adding an entirely different dimension to the arrangement. The reading of "Amazing Grace" is introduced slowly by Laws playing the melody in the lower register. James joins him on the changes before the strings enter sparsely at the minute mark. They color Laws' flute with elegance and a touch of Celtic hymnody. A harp duets with Laws on the third verse; violins and cellos brighten it sparely. When Carter enters, the tempo picks up; the mood changes instantly. It begins to sway, shimmer, and shift, reaching nearly transcendent heights of expression before it all quiets down to Laws' flute unaccompanied, improvising on Bach before returning to the folk roots of the song. These are just the highlights; Morning Star is a joy all the way through, whether it's in the bluesy soul-jazz of "No More" or the occasionally abstract "What Do You Think of This World Now?," which riffs on "America the Beautiful." It's Laws at his very best; it helped define the essence of CTI.
Posted by Zen Archer at 12:11:00 AM