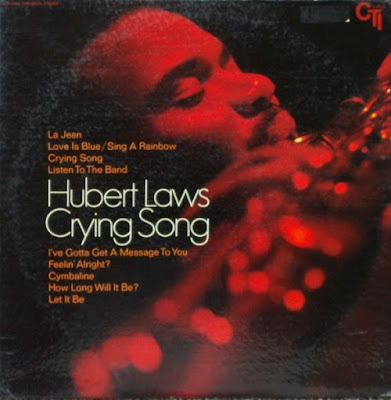 
Hubert Laws occupies rather an ambivalent position in critical estimation. He was very unusual in concentrating on the flute but signing for Creed Taylor and his band of Memphis Soul specialists should have orientated him squarely in the vanguard of late 1960s Jazz. If the precedent was another elite flautist, Herbie Mann – who’d already had a hit single for Atlantic – then the decision was sound. But if these three LPs, made between 1969 and 1971, didn’t seem somewhat incongruous stylistically at the time – and they did, to many people – they certainly do today.

That’s not to denigrate Laws, whose tone is utterly ravishing throughout, but the attempt in the first album, Crying Song, to construct a pop album with fringe Memphis and Country Soul stylings was never going to satisfy the purists. Others, such as Keith Jarrett and Gary Burton, were naturally situated along Country Roads and their albums of the late 60s showed strong affinities for the genre within a broader musical context. But Laws’ first album, despite the presence of stellar sidemen such as Ron Carter, Billy Cobham, and on several tracks George Benson – along with a raft of other superb players – fails to cohere. Country Soul, the Monkees, mild Psychedelia, the Bee Gees and Lennon/McCartney with sitar impersonations; well, it’s a big ask for much of this to stand the sterner tests of time.
Posted by Zen Archer at 11:16:00 PM