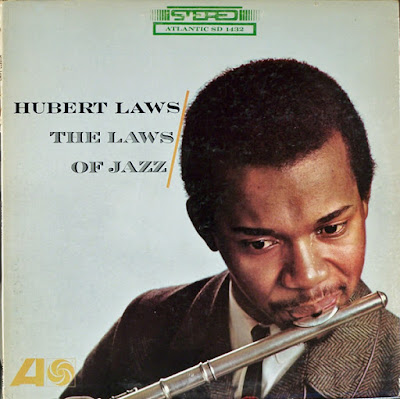 As a lead instrument, two names immediately jump out when it comes to the jazz flute: Herbie Mann and Hubert Laws. Rightfully or otherwise, these two cats can carry some negative baggage with modern jazz fans due to the fame they found with more commercial releases in the 1970s. I'll admit I only associated Laws with his adventurous early CTI albums, a few of which I really enjoy, and it wasn't until I came across The Laws Of Jazz that I realized he had started his career off with Atlantic Records putting out some quality straight-ahead jazz records.

The Laws Of Jazz is an enjoyable hard bop record, with Laws staying very much in the cut with his compostions and solos (there is none of the fire of Eric Dolphy or Rahsaan Roland Kirk to be found here). The most enjoyable and memorable of the tracks are the two bluesiest numbers, "Bessie's Blues" and "Bimbe Blues," where Laws gets to really stretch out with some soulful work on the flute. The group on hand has some familiar names in Richard Davis, Jimmy Cobb and Chick Corea (billed here early in his career as Armando Corea), who all add some nice solos and flourishes to the proceedings. Laws does play the piccolo on two of the tracks, an instrument that just doesn't work for me in this setting, it's high-pitched sound is too grating for my ears.

Laws would, as mentioned, find enormous commercial (and even some critical) success in the early seventies with his unique blending of jazz and classical music on the CTI label. A few of these records, particularly Morning Star, Afro Classic and In The Beginning are really quite groundbreaking in combining jazz, classical and pop artistry into one cohesive presentation. However, the easy going nature and appearance of pop tunes like James Taylor's "Fire and Rain" or the theme from the movie "The Love Story" turned off a lot of "serious" jazz fans, both then and now. I'm not going to try and convince you of the merits of these sessions, you either appreciate them for what they are or you don't. In any case, any fan of hard bop and modern jazz will enjoy The Laws Of Jazz, both as a historical document (Laws' debut and a very young Corea) and for the enjoyable music it offers.
Posted by Zen Archer at 10:58:00 PM