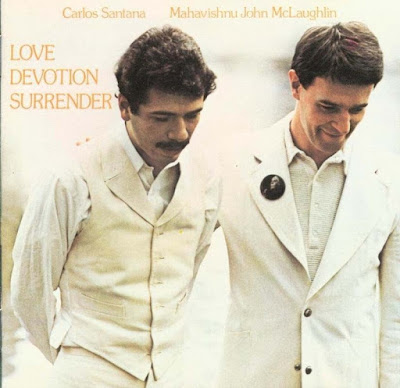 In 1973, Carlos Santana had become mesmerized by the music of the Mahavishnu Orchestra. His interest became so strong that he literally followed the band on tour across America. He and McLaughlin became friendly. One night John McLaughlin had a dream that the two should record an album together. He took that dream to Clive Davis, the head of Columbia Records, and Love, Devotion and Surrender was born.

LDS delivers some of the hottest playing you are ever going to hear. John McLaughlin and Carlos Santana play their respective butts off, especially on the inspirational "Let Us Go Into The House Of The Lord". The rapid-fire machine gun bursts and call and responses make for an electric guitar Nirvana. Other musicians assembled for the recording included Santana compatriots Armando Peraza, Don Alias, Doug Rauch and Mike Shrieve. John McLaughlin brought along Jan Hammer, Billy Cobham and the legendary organist Larry Young. Imagine a Latin Mahavishnu Orchestra!

At the time of this recording’s release, the patience and reverence afforded gurus was waning. This could help explain the relatively poor sales of Love, Devotion and Surrender relative to expectations. After all a smiling Sri Chinmoy, in all of his splendid grandeur, was pictured on the album cover. It may also help explain the many negative reviews. In hindsight, you will probably find that most of these reviews came from Santana fans that just couldn’t figure out what was going on with their hero.

Despite all outward appearances, the fact of the matter was that this album pointed much more in the direction of John Coltrane than it did any guru or religious movement. Santana is, like McLaughlin, a devoted Coltrane admirer. McLaughlin and Santana even make the effort of trying to pull off “A Love Supreme,” and it works very well. (Even the vocals are effective). An acoustic treatment of “Naima” does the master proud, too. The other players are strong on all tunes. Cobham, in particular, is a powerhouse.

In recent years, Love, Devotion and Surrender has begun receiving the praise it so richly deserves. (Bill Laswell has even released a well-received remix.) LDS remains a milestone in the history of fusion music. We can only hope that McLaughlin and Santana will find an opportunity to record together again soon, something both men have hinted at.
Posted by Zen Archer at 10:56:00 PM