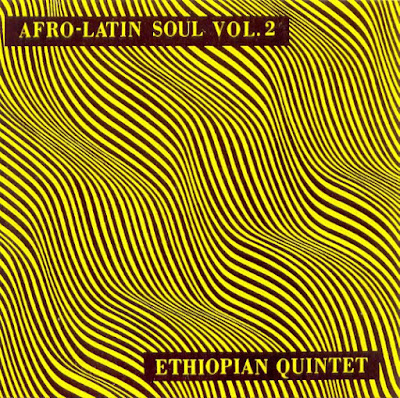 
For those who might not be familiar, Mulatu Astatke is as important to the history of Ethio-jazz as Fela Kuti is to Afrobeat, defining the genre from it's inception. . . . On 'Soul Power', we find another great example of Astatke's signature sound, blending together traditional Ethiopian music with Latin-jazz. Simply put, just another classic composition from one of the genre's most influential and legendary musicians." --Pat Les Stache, American Athlete

It's been decades since Mulatu Astatke has performed his so-called Ethio Jazz in the United States, back when he toured and recorded in the 1960s with his Ethiopian Quintet. But the arranger-composer will be doing so again Wednesday in Arlington at the Regent Theatre, in the first of three concerts with the Either/Orchestra.

A fusion of the traditional music of Mulatu's native Ethiopia and the jazz and Latin influences he picked up as a student in London and Boston in the late 1950s and early '60s, Ethio Jazz enjoyed its short, largely unnoticed heyday between Mulatu's return to Ethiopia from New York in 1968 and the rise of the Marxist dictatorship there in 1974, after which the recording industry in that country remained shuttered for years.

By then, Mulatu had become a major figure in Ethiopian music. He had done so by bringing home and introducing such Western instruments as a Hammond organ, vibes, congas, and timbales, and, more important, by adapting to traditional Ethiopian melodies the composing and arranging skills he had studied under Herb Pomeroy and others during a short stretch at the Berklee College of Music.

Miles Davis, John Coltrane, and others were experimenting with modal jazz at the time Mulatu was studying jazz, and that and other influences shaped his Ethio Jazz.

''I still listen a lot to Gil Evans," says Mulatu by phone from his son's home in northern Virginia, recalling the musicians who affected him most in those seminal years. ''I love George Shearing very much -- I like his changes, I like his approach to his 12-tone music. I was listening a lot to Randy Weston. Coltrane I was listening to a lot. And Miles. Those are the people who really influenced me."

Mulatu's main challenge in combining traditional Ethiopian music with jazz, he says, involved integrating the pentatonic-scale-based melodies of Ethiopia with the 12 tones on which Western music is based. The result, to Western ears, has an eerie, exotic, almost trancelike feel to it, coupled with more familiar jazz, Latin, and soul rhythms and harmonies.

''Whatever you do," Mulatu says, ''if you touch the melody, then the whole thing's going to be changed. So the only thing you have to do to make this music interesting is to really work on the harmonic side of it. So I really worked on what I studied -- nice arrangements and nice voicings and nice soloing."

Mulatu's recorded output has, of course, been sparse. Still, it was recordings that serendipitously brought him together with the Either/Orchestra this past January, when the E/O capped off a two-week tour of the country by becoming the first non-Ethiopian band to perform at the annual Ethiopian Music Festival in Addis Ababa.

Gershon went on to include arrangements of Ethiopian tunes on the E/O CDs ''More Beautiful Than Death" and ''Afro-Cubism." Those got noticed by Falceto and led to an E/O appearance in Addis Ababa. (The E/O's live festival performances with various Ethiopian musicians, including Mulatu, will make up volume 21 or 22 of the ''Ethiopiques" series, says Gershon, and probably be released this spring.)

''There's not that long tradition of high-level jazz playing that they're coming out of," Gershon says of the Ethiopian instrumentalists he heard on disc, ''so there's a sort of simplicity to the playing that I really like. . . . It's sort of all vibe, all feeling, coming through relatively simple technique."

For his part, Mulatu, whose main performing instruments are vibraphone, piano, and percussion, is delighted after all these years to work with American musicians who combine high-caliber chops and a genuine affinity for his music.