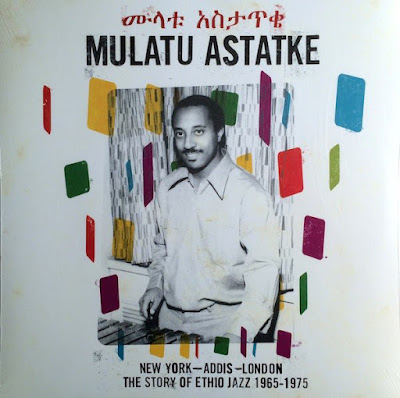 Arranged as a retrospective of the formative work of Mulatu Astatke, the godfather of Ethio-jazz, a fusion of Ethiopian music and—you guessed it—jazz, The Story Of Ethio Jazz is 20 tracks ranging from two to six minutes outlining the development of the form over a 10-year period. Dominated by the vibraphone, Astatke’s signature instrument, the pieces are short, modal and are short on development, but heavy on mood.

That’s really what The Story Of Ethio Jazz tries to impart—a mood, a flavor for the genre. Many of the cuts here are a patois in that they don’t particularly feel like a developed style at all but instead a chunky primordial stew. It’s not your seamless Miles Davis fusion, it’s a more blunt and rash.

And it has its own charm in that way. These are certainly songs of development rather than final forms—this is basically what Astatke had in his vaults—and so it’s more of a piece to either introduce listeners to the basics of the form, or more likely, to give musicologists a record of the genre’s development. Either way, I’m for it.

This album?s subtitle, ?The Story of Ethio Jazz 1965-1975,? might give one pause. After all, it?s only the work of one man, vibes and keyboard player Mulatu Astatke, and no man is a genre, right? But it makes sense when you consider that Ethiopian music so prizes linguistic cleverness that there?s just not much of an orchestral or jazz heritage. Even at the height of Ethiopia?s golden age of pop music, which flourished during the waning years of King Haile Selassie?s reign, not many players played jazz of any stripe besides Astatke and saxophonist Getatchew Mekurya. And while Mekurya?s music simply transferred a traditional battle chant to the sax, Astatke developed a singular synthesis informed by a non-parochial appreciation for non-Ethiopian styles that was quite out of step with his milieu.

But then, Astatke was not your average Ethiopian. He was sent to England to study engineering, but turned out to be a natural musician. He fell for jazz, English style, at nightclubs like The Flamingo and Ronnie Scott?s, then tracked it to New York City, where he spent a few years playing in Latin bands and started evolving a fusion of jazz, Latin, and Ethiopian elements. When Astatke returned to Ethiopia in the late 60s he found plenty of opportunity to work as an arranger and musician behind the era?s great singers, which in turn yielded chances for him to record instrumental b-sides and a couple of LPs. But since instrumental music had no local constituency they were never terribly popular and his career, like nearly every Ethiopian musician?s, hit a wall in 1975 when a Marxist coup ushered in over a decade of martial law. But it gained a second wind in 1998 when Buda Musique devoted an entire volume of its Ethiopiques series his music. Collaborations with the Either/Orchestra and the Heliocentrics followed, and the few tracks of his music that ended up on the soundtrack of Jim Jarmusch?s film Broken Flowers were most memorable thing about the movie. Even so, no one had pulled together Astatke?s NYC and London recordings with those from Ethiopia.

New York-Addis-London redresses that lack, and in doing so provides a broader perspective on Astatke?s music than Ethiopiques 4 even though they start with the same track. With its moody horn melody, throbbing electric piano, and terse r&b groove, ?Y?k?rmo S?w? is deeply eerie and impossible to forget. But the next track takes us back to New York, where Astatke worked mostly with Puerto Rican musicians. ?I Faram Gami I Faram? begins and ends with elephant-like trumpeting, but what falls in between is a seamless weave of salsa piano and Amharic singing. Even in 1966, when Astatke was just 23 and new to recording, he had a sound in mind that integrated Ethiopian melodies with Afro-Latin rhythms. His mallets and tropical sound effects hint at Martin Denny and Arthur Lyman, the vibrant grooves pretty Nuyorican, the melodies harder to place. But since New Yorkers didn?t quite grasp the pentatonic scales of Ethiopian music, although the trumpeter on ?Mascaram Setaba? comes close. Astatke?s concept didn?t quite gel until he took it back home, and even then it took time. New York-Addis-London includes some of his work singers. The track he crafted for Tlahoun Gessesse has a stripped-down Latin slink in its rhythm that agitates pleasingly against the horns? mournful riffs, but it?s the singer?s voice, chuckling one moment and imploring the next, that dominates. ?Yefikir Tezita,? an instrumental he composed for the b-side of another Gessesse song, brings that pentatonic Ethiopian melancholy into focus, but the rhythm is a little too crisp and simple. ?Y?katit,? recorded five years later, is a total integration, with thick, unhurried polyrhythms rolling under pulsing Wurlitzer piano, snaky flute, and a magnificently degenerate wah-wah guitar lead.

While Strut records has released New York-Addis-London, the man who put it together was Miles Cleret of Soundway Recordings. His liner notes, while not quite so obsessive as those for the Nigeria and Ghana Special releases, are lively, informative, and steeped in love for their subject, while reproductions of old LP sleeves and snapshots of the ever-dapper Astatke offer glimpses into a bygone time. Great stuff.
Posted by Zen Archer at 11:33:00 PM