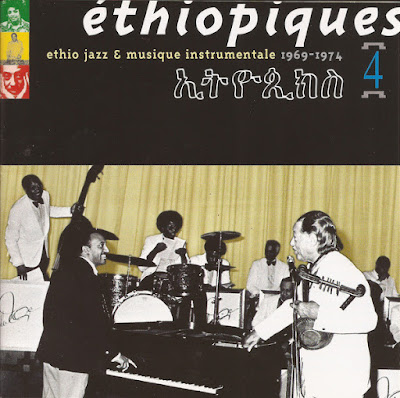 
To some, the term "Ethiopian jazz" might seem impossible; after all, it's a very American form. But what's truly surprising isn't the fact that these musicians play jazz so well, but the range of jazz they manage, from the George Benson-ish guitar workout of "Munaye" to the twisting sax of "Tezeta." Really, though, it's more Jimmy Smith than Duke Ellington in its aim (although Ellington is on the cover, on stage with Mulatu Astatke, the bandleader behind all these selections). The grooves often smoke rather than swing, with some fiery drumming, most notably on "Yekermo Sew," and throughout the guitar is very much to the fore as a rhythm instrument. Perhaps the most interesting cut, however, is "Yekatit," from 1974, which is Astatke's tribute to the burgeoning revolution which would oust Emperor Haile Sellassie. Some of these pieces, certainly "Dewel," has seen U.S. release before; the track appeared in 1972 on Mulatu of Ethiopia, which was Astatke's third American LP, showing that jazz aficionados, at least, had an appreciation for what he was achieving in the horn of Africa. Given that many of his musicians had graduated from police and military bands, they knew their instruments well, and had plenty of practice time, which shows in the often inventive solos that dot the tracks. Varied, occasionally lyrical, but interesting throughout, this shines a fabulous spotlight on a hidden corner of jazz.
Posted by Zen Archer at 11:29:00 PM