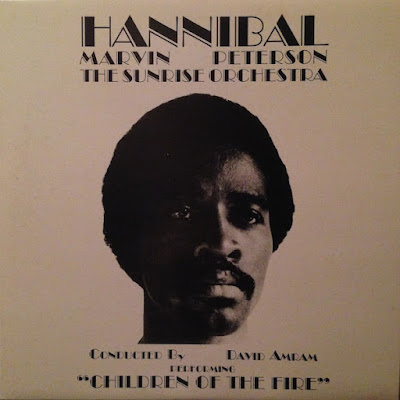 Trumpet and koto player Marvin "Hannibal" Peterson has led a reclusive career in jazz since the early '70s, when he first started making albums. A free jazz player in the style of Don Cherry with the metallic tone of Freddie Hubbard, Peterson is widely unknown even to the most diehard jazz fans. His low profile is strange given that he played with popular artists like Pharoah Sanders and Elvin Jones and was a regular member of Gil Evans' big band from '72 to '81.
On his recently reissued first album, Children of the Fire (Sunrise, 1974), Peterson takes his Sunrise Orchestra deep into jazz-classical territory, making his music sound like the Third Stream of Charles Mingus and Gil Evans.

Children of the Fire is a suite in five movements, beginning with "Forest Sunrise," a magical segment of bird-sounding whistles and string arrangements in front of a percussion backdrop. The second part of the movement, "Rhythm Ritual," starts off with the orchestra but then breaks into a straight-ahead but funky rhythm by drummer Billy Hart, bassist Richard Davis and pianist Michael Cochrane. Peterson then enters with a fiery blues solo that recalls the big fusion band sound of electric Miles.

Peterson composed all of the music on Children of the Fire, including the poetry on the spiritual hymn "Song of Life," sung by Waheeda Massey. The music and poems on the album were dedicated to the children of Vietnam during the tail end of the war in Southeast Asia. The highlight of the album is the fourth movement, "The Aftermath," which has a rapid and colorful drum solo by Billy Hart and a long free bop solo by Peterson that is encouraged by the spontaneous trio of Hart, Davis, and Cochrane.

Children of the Fire is an excellent snapshot of where fusion was headed during the early '70s. Electric jazz-rock, injected with heavy doses of classicism, was made popular by the Mahavishnu Orchestra during this time. But the underground Sunrise Orchestra delivers the goods, mixing hard bop and abstract jazz with a Far Eastern spirituality.
Posted by Zen Archer at 8:09:00 PM