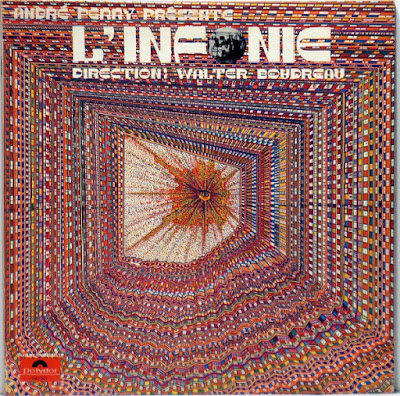 L'INFONIE were born as a Québécois versatile rock commune in 1967 around the initiator Raôul DUGUAY and the musical chief Walter BOUDREAU, just along the Québécois "multidisciplinary" music scene in those days. Quite in the vein of late-60s concentrated music essence, mixed with pop, jazz, and classic, they recorded their first creation "Vol. 3" (currently released as an eponymous one) at André Perry Studio and released in 1969.

Amazingly, their soundscape had been altered moment by moment - obvious jazz rock / fusion movement and a talented American musician Terry Riley could exert pretty influence upon their second work "Vol. 33 (Mantra)", featuring a sole suite "Mantra" based upon Terry's landmark piece "In C".

Finally L'INFONIE breathed new life into Québécois progressive rock world with their third double-album "Vol. 333" released in 1972, mainly structured with more experimental / magnificent suite "Paix" occupying the entire first LP as 50 pieces of composition (plus prelude). They could stand at their peak with this stuff, that might let Raôul leave away for his solo career as a poet / author / songwriter soon thereafter, as a result.

« L’Infonie is part of a historical movement that tried to shake the foundations of our culture… Shock, surprise rather than flatter. Rub the wrong way… In those days the group members weren’t drop outs but we were trying to stir away from the usual artistic conformity. We had seen enough. We went out of our way to appear with toilet seats or coat hangers on our heads: trying to break something. » — Walter Boudreau (1979)