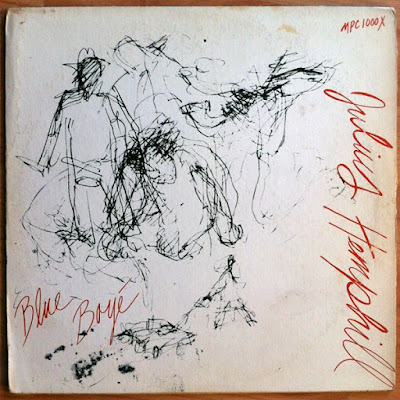 Julius Hemphill was the original leader of the World Saxophone Quartet (WSQ). He is also remembered for his extraordinary recordings with his own sextet, and for his work with the cellist Abdul Wadud to mention only some of his accomplishments. Hemphill died of diabetes in 1995.

Screwgun Records, a small label operated by the saxophonist Tim Berne, has recently released an early recording (1977) of Hemphill's entitled: Blue Boye.
This is a 2CD set of solo, and layered solo work, of this master musician/composer who accompanies himself on a variety of instruments. Hemphill is most known for his alto and soprano saxophone work. On this CD he also plays flute, and at times accompanies himself with clapping, hand percussion, and voice. "Accompanies" doesn't do justice to the duet and sometimes small ensemble feel of the music.

It is likely that Hemphill will ultimately be recognized as a major 20th century jazz musician and composer. With this in mind, "Blue Boye" is an invaluable addition to recorded jazz, but Screwgun Records can be thanked for releasing this CD set for more than historical reasons. Not only is it a quirky portrait of an American master early in his career, but it is also startling jazz.

Those who are familiar with Hemphill?s saxophone virtuosity ranging from blues to bebop and far beyond will be on familiar ground. But the listener will also be treated to a flute/voice solo that slides jazz into slapstick comedy. The opening solo, alto cut on the second disc, 'Kansas City Line,' is alone worth the price of admission. Soulful, bluesy, subtle, and complex are adjectives I associate with Hemphill and this wonderful disc set only deepens my admiration for one of the truly great figures of modern jazz.