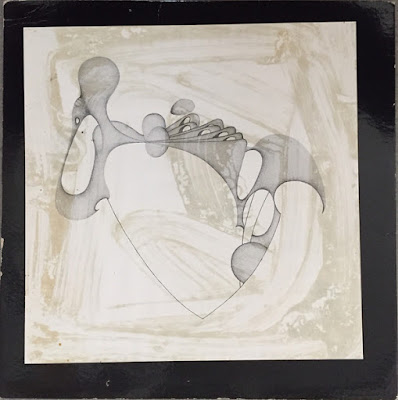 Recorded in Cambridge, Massachusetts in 1970.

Monster free jazz private press lp entitled Musiki by The Huseyin Ertunc Trio.It is an original pressing on Intex Records out of Bayside New York.This is a Classic Cosmic free jazz improv lp from the mid 70s and has never been legitimately reissued in any format! Truly Killer Out There jams!Has at times an arabic trance vibe.

To give you an idea as to where these guys where coming from;here's a taste of the liner notes: 'In now listening shant's moving those whom hear lights outside too's numerous willing towards all spirits roundm's form above thy one's insides space carry animal't surface in reflect placement..."

A new world of improvisational freedom opened up for me when I first heard drummer Huseyin Ertunç's 1970 LP Musiki (Intex), with reedmen/multi-instrumentalists/brothers Phill Musra and Michael Cosmic. Ertunç returned to his native Turkey about twenty years ago (and performs with the Konstrukt collective), but Musra - this tune's composer - now resides in Los Angeles and, as regular readers of this blog know, is still active in music. Although I initially assumed that Musiki and Musra's companion LP The Creator Spaces were recorded at the same session, in truth Musiki was recorded months earlier. The Creator Spaces is a bit more spacious than Ertunç's date, though both are quite intense documents of self-produced and spiritually-directed improvisation. Knotty and weird, there's a folksy unhinged-ness that really spoke to me in a way quite different from Albert Ayler, the AACM, and other music I was spending time with when I dropped the needle on the trio's debut album. Ertunç's percussion work really shocked me and it's still absolutely fascinating (as you'll hear below), and Cosmic's organ playing behind/around Musra's tenor is just... something else. A CD reissue was floating around a few years ago and can probably still be procured.
Posted by Zen Archer at 5:30:00 PM