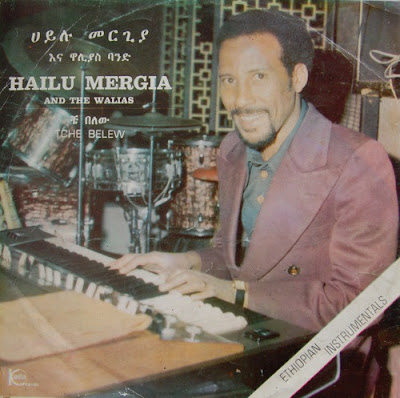 
Dozens of cherished recordings were made during the legendary “golden age” of Ethiopian music, an era stretching from the early 1960’s through the mid-1970’s. Less-discussed are the songs made in the aftermath of the 1974 revolution that toppled Emperor Hailu Selassie I. The acclaimed and highly sought-after LP by Hailu Mergia and the Walias, Tche Belew, an album of instrumentals released in 1977, is perhaps the most seminal of these recordings. The story of the Walias band is a critical chapter in Ethiopian popular music, taking place during a period of music industry flux and political complexity in the country.

Hailu Mergia, a keyboardist and arranger diligently working the nightclub scene in Addis Ababa, formed the Walias in the early 1970’s with a core group of musical colleagues assembled from the remnants of prior working bands attached to the Zula and Venus clubs. One of the first “private” bands, the Walias got a steady gig at the prestigious Hilton Addis Ababa and remained independent from the government-supported bands of the time as well as from the clubs who employed bands.

While the oppressive and often brutal, Socialism-inspired Derg government (1974-1987) had a firm grip on Ethiopians following the revolution, Walias organized their own contracts and eschewed government patronage. Unlike the celebrated bands of the run-up to Selassie’s removal—the Police Orchestra, Imperial Bodyguard Band, National Theater Band, Ethiopian Army Band, Hager Fikir Theater Band, City Hall Theatre Folkloric Group and so on—the Wailas developed fame on their own terms and maintained control of their instruments and performances. They played the blues-, funk- and soul-informed tunes Mergia was writing and arranging, while cutting 45rpm recordings released by Kaifa Records with popular vocalists, including Getachew Kassa and Alemayehu Borobor.

After several singles, Mergia decided to do something different: record a full-length album. The band—which at the time featured Moges Habte (saxophone and flute), Mahmmud Aman (guitar), Yohannes Tekola (trumpet), Melake Gabrie (bass guitar), Girma Beyene (piano), Temare Haregu (drums), Abebe Kassa (alto saxophone) and special guest Mulatu Astatke (vibes)—entered Radio Voice of the Gospel studios to record their first long-player. The director of the station knew Mergia personally and connected the band with a sound engineer there. (Incidentally, the Lutheran-owned station was taken over shortly thereafter by the Derg government and used for propaganda purposes.)

Influenced in large part by Jimmy Smith, Mergia and the Walias merged the popular international sounds available in Ethiopia at the time with the traditional tunes that formed the foundation of most musicians’ repertoires. But for this LP, instead of playing the role of backing band, Mergia wanted four of his bandmates to contribute arrangements, so that the album would capture a spectrum of sounds with the instruments and groove positioned out front.

Recording in one large room, the band spent two days laying down the songs, completing several of them in single takes. It was the most professional technical set-up they had used thus far, with modern studio facilities and quality instruments (Mergia was using Farfisa and Godwin organs at the time). Being that this record was predominantly instrumental—extremely rare among Ethiopian LPs—it’s notable that Tche Belew features a backing chorus. Interjecting brief phrases on a few songs, the trio of accomplished vocalists Aster Aweke, Getachew Kassa, and Tegest Abate are the only voices heard on the recording. In the aftermath of the LP’s release, the public’s response was strong and the LP and cassettes sold better than expected.

While the band never travelled outside Addis Ababa, they performed at top hotels and played the presidential palace twice. The Walias’ relationship with the Derg regime was complex though, evidenced by the removal of one song from the record by government censors because it included mention of the previous government. The regime’s broad policy of violence and censorship—including a period called the Red Terror that featured genocide-level disappearances of students, activists and villagers and the indiscriminate imprisonment of journalists—ultimately resulted in half the band staying in the United States following their first tour outside Ethiopia in the early 1980s. Today the musicians remain scattered between Addis Ababa and Washington D.C.

Decades later, Hailu Mergia was surprised to see the album fetching more than $4,000 at online auctions. The Walias had recorded the most famous and wide-reaching of all Ethiopian tunes from that era, “Musicawi Silt,” which was composed by the band's pianist Girma Beyene. Covered by bands from all over the world, “Musicawi Silt” and the rest of this long-awaited reissue have lived on among record collectors and older Ethiopians to this day. Now everyone has the chance to listen again—or for the first time—to this timeless pillar of Ethiopian popular music.

There is a musical moment of great significance in Jim Jarmusch's road movie Broken Flowers. The main character, Don, is going on a journey and has received a cassette with music. When he puts the cassette into the tape deck, the strange, deep and funky sounds of Ethiopian master Mulatu Astatke emerge from the speakers. Music like this has fascinated many listeners and the acclaimed series Ethiopiques, which has reached 29 volumes, speaks about the demand for Ethiopian sounds.

There is still a lot of great music to discover and, fortunately, Brian Shimkovitz, who runs the blog and label Awesome Tapes from Africa, has unearthed one of the true gems of Ethiopian music: Tche Belew by Hailu Mergia and the Walias. As it is pointed out in the excellent liner notes, the album does not belong to the golden age of Ethiopian music, which is considered to be the period from the early 1960s to the mid- 1970s. However, the instrumental album, released in 1977, has become a true collector's item and it is easy to hear why.

Bandleader, keyboardist and arranger Hailu Mergia gathered a strong group for the recording of the album, including saxophonists Moges Habte and Abebe Kassa, drummer Temare Haregu and special guest Mulatu Astetke on vibes. At the time, Mergia had been working the nightclub-scene in Addis Ababa and knew how to create funky and elegant sounds, but Tche Belew broadened the musical palette, with no less than four of the band members helping out with the arrangements to create a diverse canvas of sound.

There are elements of jazz on the swaying, swinging rhythm of "Yikirta Lemminalehu" with Astatke's chiming vibes and walking bass patterns from bassist Melake Gabrie while "Lomi Tera-tera" is all wah-wah guitar, subtle percussion and spiraling arabesque organ figures from Mergia.

Mergia was influenced by organist Jimmy Smith and there are traces of soul, blues, jazz and funk in the band's deep instrumental cuts, but all these genres are filtered through a specific Ethiopian sensibility, with the characteristic scale system playing an important role. It is also about the lush contrapuntal clarity and balance between the instruments. Especially the use of both organ and piano is successful, with the added power of the horns and a rhythm section that is both swinging and tight. Tche Belew shows how sophisticated funky music can be and it is an album that connoisseurs of Ethiopian music should not be without.

Though I’ve heard some late 70s cassettes that have blown my mind, I do believe that there are only three instrumental Ethiopian albums (that is: vinyl-only) recorded and released during what Francois Falcetto of the Ethiopiques series has termed “The Golden Seventies.” Two are by the ubiquitous Mulatu Astatke, and saw release on the Amha label. The first, Ethiopian Modern Instrumentals Hits, collected his 7? releases on the label while the second, Ethio-Jazz from 1974, contained previously unreleased, long-form compositions. The third is the record you see here, credited to Hailu Mergia and The Band Wallias but owing much to Astatke (featured, naturally, on the instrument he introduced to Ethiopia – the vibraphone). It saw release on Ali Abdella Kaifa’s self-named label.

As Falcetto points out on his excellent liner notes to Ethiopiques Vol. 4, there was not much of an instrumental tradition in Ethiopia until the advent of brass bands in the early part of the 20th century. Thus it’s not surprising that outside of the adventurous Astatke very few people attempted to record and release instrumental music in the short period during which the Amha, Kaifa and Phillips released a few hundred 45s and a handful of LPs in the country.

Why this album contains only one song like “Musical Silt” is ponderous. The rest of the album is enjoyable, equally funky and benign. But “Musical Silt,” the only song from the album ever reissued, is a beast. While some might call it dissonant, it’s beautifully modal, a perfect example of the Ethiopian qenet system tempered by the tuning of the Western instruments the musicians play. And the rhythms; each component of the ensemble plays in their own time signature. “The one,” which most fans of funk music so readily anticipate in a rolling groove, never sounds exactly like you’d expect it. But the song chugs along perfectly – it ends some four minutes in, but you wish it would run for hours. A hypnotic groove fo’ sho’.

Thus, while the song owes much to Astatke’s influence, we can’t cease without giving respect to the arranger and pianist Girme Beyene, whose tenure with the band Wallias continued as the band left Ethiopia and toured the USA in the early 80s. This song is arguably his masterpiece, which says quite a lot considering the quality of musicians he produced during his time in Ethiopia (including the awesome Alehmayehu Eshete).
Posted by Zen Archer at 11:38:00 PM