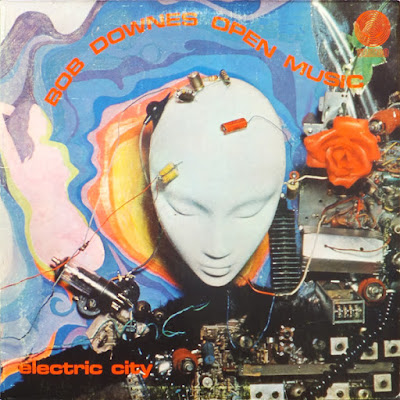 
Flutist / composer Bob Downes is one of the most creative and innovative figures on the British Jazz scene, with a wide scope of cross-genre contributions from contemporary Classical Music via Jazz and Jazz-Rock to Free Jazz and Improvised Music. Downes was an integral part of the late 1960s / early 1970s revolution, that emerged in British and European Jazz, emancipating it from years of American influence and domination, and participated in numerous seminal recordings made during that period. His many activities were usually executed under the loosely defined umbrella name of Open Music, which varied from a trio to a large ensemble and as the name suggests was completely free from any stylistic or genre restrictions. After recording several albums for mainstream record labels in his early days, Downes created his own record label, called Openian Records, on which he releases his projects, being one of the first musicians to do so. By the early 1980s Downes moved to Germany, where he lives and continues his work today. This incredible album presents Downes as a composer of Jazz-Rock oriented shorter pieces, packed with energy and intricate arrangements. The list of participating musicians is awe inspiring, with some of the most illustrious musicians on the scene at the time, like trumpeters Kenny Wheeler, Ian Carr and Harold Beckett, guitarist Chris Spedding and Ray Russell, bassist Harry Miller and many others. The music is brilliant, breathtaking and captivating. The virtuosic performances are ample expressions of the underlying musical currents and once immersed in the magic sound, the listener is completely absorbed and mesmerized. They don't make music like this any more, that's for sure. Brilliant stuff!

Released on the legendary Vertigo "swirl" label, Electric City was one of the wilder and more obscure issues of the famous 6360 series. But if I say wild and obscure, it is nothing compared to his later works in the mid-70's, as here the music is very accessible resembling some kind of brass rock, as the cast of guest on Bob's first album is an impressive who's who of Phillips-related musicians, pictured assembled on the inner gatefold. The outer gate-fold presents a wild collage electronic devices, wild psychedelic colors and Downes in full action, the whole thing permeating a white dummy head; stunning, especially once you'll be that white face

Made of short tracks (except the closing opus), the album has splendid up-tempo rhythms, juicy horn arrangements, great virtuoso musicianship and acceptable vocals. Yup, Downes' vocals are not the main asset of this album yet, Bob's lyrics (all his except for the opening No Time like The Present, which is from poet Robert Cockburn, foreseeing their collab of Deep Down Heavy) are always interesting, but let's face it, we want his flute and sax and he doesn't disappoint. Indeed the fabulous Keep Off The Grass, Dawn Until Dawn (where Downes shows his passion for sax as well), the pedestrian Walkin' On (Bob goes nuts on the sax), the tense Crush Hour, the explosive Piccadilly Circles (waaaah, the pun) and its direct continuity into the lengthy (7-mins+) Gonna Take A Journey, which plunges into free improvs.

Other titles are more R'nB, like Don't Let Tommorrow, Go Find Time, and the bossa nova West II (the worst track of the album, even if saved by a high-flying sax solo) are less enthralling, but all remain high energy. Although we are in full brass-rock delire with this album, it never gets cheesy or pompous or bombastic as BS&T. No we're facing some of the best of the genre, right up with Brainchild, Galliard and a few more.

Although Electric City is a fine album, one that epitomizes his first three efforts, it sounds NOTHING like the later works of his. But this one is definitely worth a shot and should be the introduction to Downes' world of sounds.
Posted by Zen Archer at 4:40:00 PM