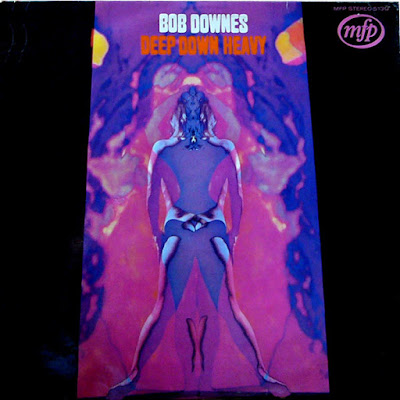 
Among the unlikeliest anomalies to have seeped from the fringes of Britain’s avant-garde jazz-rock scene, 1970’s Deep Down Heavy was originally issued, unthinkably, on the Music For Pleasure label. MFP relied upon cut-price, cutthroat reissues and moribund MOR for its desultory bread and butter, yet here it was, surreal offering an outlet for flutist/ saxophonist Bob Downes and an unruly ensemble of like-minded noisemakers (not least guitarist Chris Spedding).
The album “budget”, such as it was, probably struggled to limp into a single figure, but this turned out to be a long-term gain. Mostly recorded in London’s Conway Hall – very quickly indeed – it bristles with brassy, scratchy, first-take belligerence (Thebes Blues, Walking On, Too Late). Downes had the musicians face each other in a circle, focusing their energies inwards; engineers John Boyden and Anton Kwiatkowsky, habituated to classical recordings, deployed an insufficient number of microphones, resulting in a monumentally exciting sonic fracas. The drums in particular benefit hugely from the hall’s natural reverb, cannonading off the back wall, while the overall mystery murk compares very favourably with The Plastic People Of The Universe and Brainticket.
The band performances are interspersed with audio-vérité “field recordings” of the cheerfully peculiar Downes playing his bamboo flute on both the London Underground and a double-decker.

A rough 'n' ready excursion into the murkier realms of British psychedelia, this underrated little gem seems to get a rough deal these days, mainly thanks to it's rushed, low-budget production and the gritty, almost Altman-esq sound quality. Issued in 1970 on the EMI-backed Music For Pleasure imprint, 'Deep Down Heavy' was one of three albums issued during 1970 by jazz-flautist Bob Downes, the others being 'Open Music' and the high-brow sounding 'Bob Downes New Sounds For Flute, Percussion & Synthesizers'. Of the three, this curious psych-jazz relic is perhaps the strongest, with Downes showing off his impressive flute and saxophone skills over a series of deeply-psychedelic, blues-tinged jams. Also involved is poet buddy Robert Cockburn, who adds some very gritty vocals, and rising young guitarist Chris Spedding, who seemed to be everywhere during this time, fresh from stints with both Nucleus and Pete Brown's Battered Ornaments to name but a couple. To put it bluntly, 'Deep Down Heavy' is a product of it's time, very much a lost relic from a bygone age. But that's exactly what makes it so fascinating. From the rough opening blasts of the hard-rockin' 'Too Late', to the hazy bad-trip psychedelia of the hypnotic closer 'Circus Rising', this is an album that cooks with a raw, fuzzy, late night power perfectly summed up by the album's title. It's an ambiance that is maintained throughout, with surreal background noises and strange instrumental interludes adding to the already highly mystical feel, but this is very much Downes baby and it is he who dominates, pulling off some scintillating solo's on both flute and saxophone. The mixture of deeply-trippy cosmic jamming, edgy blues riffs and druggy jazz breaks exists to serve his improvised displays, and to a lesser extent vice-versa, the lo-fi sound quality only heightening the whole late-sixties vibe. This is certainly for those with a penchant for obscure psych relics, and this writer is confident that if you take a chance on 'Deep Down Heavy' you won't be disappointed. A real curio from the heart of the sixties, it doesn't really get any more underground than this.
Posted by Zen Archer at 4:32:00 PM