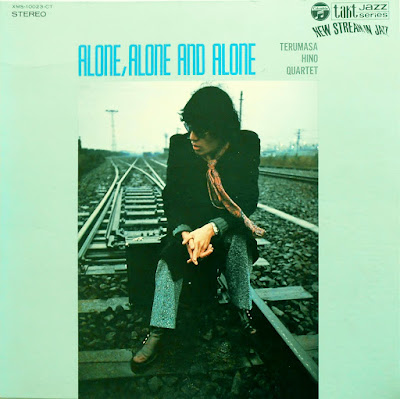 
Long considered a jazz legend and Japan’s foremost trumpeter, Terumasa Hino has played with almost all the jazz heavyweights throughout the past half century, from Gil Evans and Elvin Jones to Herbie Hancock and Chick Corea. Born in Tokyo in 1942, Hino made hgis professional debut at the tender age of thirteen, drawing his main inspiration from Freddie Hubbard and Miles Davis. For the first few years of his career, Hino was something of an opportunist, even jumping open Japan’s early ‘60s eleki bandwagon with the cash-in LP TRUMPET IN BLUEJEANS. However, his fiery temperament and ‘large brilliant tone’, as The Grove Dictionary of Jazz termed it saw Hino’s late ‘60s work increase both in output and quality, and his 1969 Columbia LP HI-NOLOGY was extremely successful commercially. Hino celebrated the new decade with the LP JOURNEY TO AIR, a hugely inventive disc taken up by the single title track, itself split into two sections ‘Part 1 – Gongen’; and ‘Part 2 – Peace & Love’. JOURNEY TO AIR also introduced future Miles Davis sax player Dave Liebman, while the LP’s European success enabled Hino to play at the Berliner Jazztage in 1971. Thereafter, he released the LPs VIBRATIONS and LOVE NATURE in rapid succession, whilst working concurrently as an editor of Miles Davis transcriptions. In June 1973, The Terumasa Hino Quintet released two amazing live LPs recorded on different continents. The LP LIVE! was recorded in Tokyo on June 2nd and released on the hip Three Blind Mice label, whilst TARO’S MOOD was captured in Munich, at The Domicile Jazzclub, and released on Germany’s Enja label. Both records were hugely raw and intoxicating by virtue of their long drawn out tracks, extreme percussive overload - supplied on both occasions by drummer Motohiko Hino and master percussionist Yuji Imamura – and Hino’s ability to stretch out from straight ahead melody to charging elephant cacophony. Indeed, the 25-minutes of ‘Predawn’ (which takes up all of side two of TARO’S MOOD) and the 28-and-a-half minutes of ‘Be And Know’ (which takes up the whole of side two of LIVE!) are two of my all time favourite pieces of Japanese music. Hino thereafter dropped the quintet, returning to the recoprding studio, in January 1975, for the epic sound of SPEAK TO LONELINESS. Again opting for one side long track and two slightly shorter affairs, the LP introduced a bigger, more brass orientated sound. Later in ’75, Hino moved to New York, where he worked with arranger Gil Evans Elvin Jones and Dave Liebman. His 1977 LP MAY DANCE was released on the Japanese Flying Disk label, and featured ex-Miles Davis stars Ron Carter on bass and Tony Williams on drums, plus legendary guitarist John Scofield. The music became a little typical of his New York environment until 1981’s Columbia LP DOUBLE RAINBOW, which appeared to be a a very successful homage to Miles’ lost 1975 funkathon period. Indeed, the fifteen minute opener, Masabumi Kikuchi’s ‘Merry-Go-Round’ opts for an AGARTHA-type atonal funk vibe, Kikuchi’s own organ intro highly reminiscent of Miles’ claw-handed voodoo take on Sly Stone’s sould keyboards. Moreover, Kiyoshi Itoh’s mixing style also apes many of the mix ideas that Teo Macero introduced to Miles Davis LPs. Thereafter, Hino returned to Japan to live and work throughout the ‘80s

Terumasa Hino is probably the best and the most famous Japanese jazz trumpeter, one of Japan's finest jazz giant influenced by Miles Davis (his american counterpart) & the Fumio 'Satchmo' Nanri's legacy (trumpeter who played with Louis Amstrong). Hino had the opportunity to work with Sadao Watanabe and others Jazz masters such as Joe Henderson, Elvin Jones, Gil Evans or Jackie McLean. From 1967 to 1970, he played regularly with this formation based on Kunimitsu Inaba and his young brother Motohiko, whose Alone, Alone And Alone is their first recording and also the first jazz album released under his own name, recorded in 1967 but released in 1970. After a interlude with Masabumi Kikuchi (Hino=Kikuchi Quintet - 1968), the group takes its final form featuring saxophonist Takeru Muraoka and the new pianist Hiromasa Suzuki who replaced Yuji Ohno. Titles include Cool Jazz songs as the introducing & Downswing, other superb gems as the brilliant Soulful, demonstrating his great trumpet skill, a variation of George Gershwin' Summertime played in the modal style & B-Lunch. All tracks composed & arranged by Terumasa Hino.