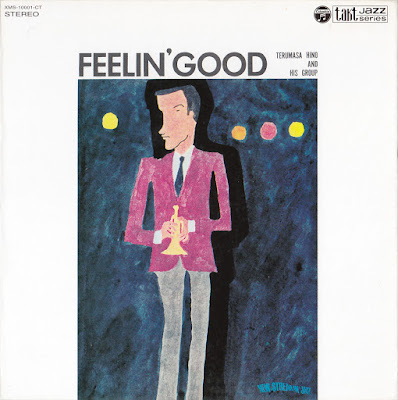 Born 25 October 1942, Tokyo, Japan. Following, more or less literally, in the footsteps of his trumpet-playing, tap-dancing father, Hino learned to tap at the age of four, and took up the trumpet when he was nine years old. He taught himself the principles of jazz improvisation by transcribing solos by Miles Davis (from whom, no doubt, he learned his conviction about the importance of space), Louis Armstrong, John Coltrane, Clifford Brown, Lee Morgan and Freddie Hubbard. He began playing publicly in American army clubs in 1955 in Japan, then joined Hiroshi Watanabe and Takao Kusagaya, but his first major job was with the Hideo Shiraki Quintet, where he stayed from 1965-69. During 1964/5 he had led his own group, and left Shiraki at the end of the decade in order to lead his own band full-time. In 1974 he worked with Masabumi Kikuchi, then in June 1975 he went to the USA and worked with Joachim Kuhn (1975), Gil Evans, Jackie McLean and Ken McIntyre (1976), Hal Galper (1977), Carlos Garnett (1977), Sam Jones (1978), Elvin Jones (1982) and Dave Liebman, as well as continuing to lead his own group, the band which John Scofield credits as moving him from fusion to jazz. By then Hino was dividing his time equally between the USA and Japan. He plays trumpet and flgelhorn with a mellow fire, and his fame in Europe continues to grow almost matching his reputation in Japan and the USA. He toured Europe with Eddie Harris in November 1990, and was reunited with Kikuchi for a rhythmic 1996 recording session featuring alto saxophonist Greg Osby.

A big band work by Terumasa Hino that Kikuchi Masaaki arranged. Famous musicians from the past participate in the event and create a magnificent sound. Personally I am puzzled by the lack of thrilling and slightly different from expectation.

This work is made up of three sets, Hino = Kikuchi Quintet only for B - 1, Others are organized in 12 people, organized in 15 orchestras. I wonder what he says, especially when it comes to a big formation I feel like a popular orchestra rather than a jazz like that feeling. Perhaps A - 1 that ends with a fade - out has embraced such a feeling that it seems to be used for TV dramas in the Showa 50 's. The title song A-2 is cool. The goodness of the song is shining while playing it. A-3 is a funky number. Tenor Muraoka built solo can be enjoyed. From the implication that there is a feeling of strangeness in the Big Band, the Quintet of B - 1 which becomes a small organization can be most emotionally transferred. Following the dark theme, straight-blown Hinotel's trumpet solo feels like the light that shines in the darkness. The unique riff is impressive and gives this work a more presence. B-2, B-3 are back in the orchestra. B-3 is the Beatles song. Well ....

Perhaps most of the songs played in Furuban are strong R & B taste, there are things of age as well. It probably does not suit the skin which contains jazz-rock like elements, probably. But I can not say that I am not good at that kind of music in the first place, I'm listening once in a while, I think that it is the most likely cause that there was a divergence in the shape of the big band that we are hoping for Hinotel. I wanted you to arrange more jazz and want the trumpet to be blown up nicely and wonderfully.
Posted by Zen Archer at 2:50:00 PM