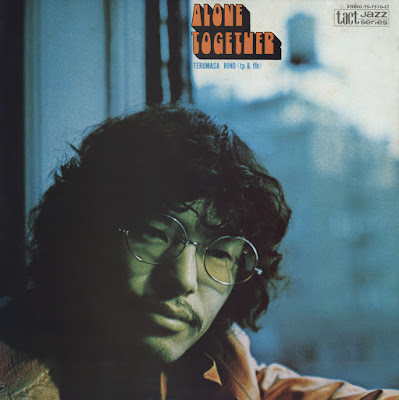 
One of the leading Japanese trumpeter Terumasa Hino (often titled "Japanese Miles Davis") differently from many co-patriots started his musical career not from short-lived but extremely popular free-jazz of late 60s.His first recordings were all hard bop (including album release in US in 1968 - quite a rare case for the time). In early 70s his music became heavily influenced by Miles Davis first fusion works.

"Alone Together" is one of Terumasa's five studio albums, released in 1970 (very successful year for Hino). Three long compositions (between nine and almost eighteen minutes long)represent very eclectic proto-fusion, kind of Davis "Miles In The Sky", but freer and more kaleidoscopic version.

If Miles genres evolution often being revolutionary has strong systematic logic, Terumasa's music here sounds more like chaotic bag full of colored glasses. Bassist Richard Davis (who played on Dolphy's "Out To Lunch!") is deeply hard-bop rooted musician who doesn't afraid playing free though. Pianist Harold Mabern is more comfortable with post-bop or even soul jazz, sax player Steve Grossman is Miles Davis fusion band's musician of the time. Terumasa's brother Motohiko Hino,who is generally great drummer,on this album is another destructive factor,blasting heavy rock-influenced strokes as he would be a God of thunder. This far not subtle drumming is stated in a front of sound mix what is most probably a fashion of the day but it often destroys initial beauty of musical pieces.

Changing styles from fusion to hard-bop to free to post-bop and closing fusion again on same long composition doesn't work all that well. Separate few minutes parts are often quite great if not too original, but chaotic travel over the genres builds potpourri-like feeling in moments. It should be noticed that Terumasa playing itself is quite great, he's less passionate trumpeter than Davis,but freer what let him find his own accents. Still all band of skilled but too different musicians where almost each member sees his mission a bit different from the rest of team, sounds undirected. Still enthusiastic atmosphere of that time and Terumasa's strong playing save music from being uninteresting or boring.

After few months Terumasa Hino will step to his next, even more adventurous period, playing freer and more advanced music, "Alone Together" stays his transitional work still interesting for his fans and probably for listeners who enjoy Japanese jazz from early 70s.
Posted by Zen Archer at 8:40:00 PM