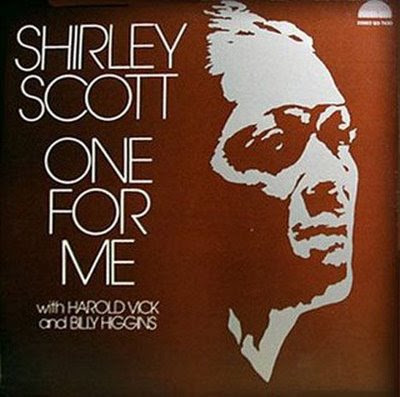 
An admirer of the seminal Jimmy Smith, Shirley Scott has been one of the organ's most appealing representatives since the late '50s. Scott, a very melodic and accessible player, started out on piano and played trumpet in high school before taking up the Hammond B-3 and enjoying national recognition in the late '50s with her superb Prestige dates with tenor sax great Eddie "Lockjaw" Davis. Especially popular was their 1958 hit "In the Kitchen." Her reputation was cemented during the '60s on several superb, soulful organ/soul-jazz dates where she demonstrated an aggressive, highly rhythmic attack blending intricate bebop harmonies with bluesy melodies and a gospel influence, punctuating everything with great use of the bass pedals. Scott married soul-jazz tenor man Stanley Turrentine, with whom she often recorded in the '60s. The Scott/Turrentine union lasted until the early '70s, and their musical collaborations in the '60s were among the finest in the field. Scott wasn't as visible the following decade, when the popularity of organ combos decreased and labels were more interested in fusion and pop-jazz (though she did record some albums for Chess/Cadet and Strata East). But organists regained their popularity in the late '80s, which found her recording for Muse. Though known primarily for her organ playing, Scott is also a superb pianist -- in the 1990s, she played piano exclusively on some trio recordings for Candid, and embraced the instrument consistently in Philly jazz venues in the early part of the decade. At the end of the '90s, Scott's heart was damaged by the diet drug combination, fen-phen, leading to her declining health. In 2000 she was awarded $8 million in a lawsuit against the manufacturers of the drug. On March 10, 2002 she died of heart failure at Presbyterian Hospital in Philadelphia.

The late shirley scott was one of the great soul-jazz organists, and as near as i can tell, the only woman among the bunch. She recorded her own stack of albums for blue note, impulse!, cadet and other labels, and mostly didn't get quite the recognition all the other organ burners did in that classic period before the electric piano and synthesizers took over the work of keyboard funk in jazz. She was married to the great stanley turrentine, and i have to say that some of the equally under recognized harold vick's work here sounds a bit turrentine-ish--but better! Anyway, this is her contribution to the always-amazing strata-east label.
Posted by Zen Archer at 5:06:00 PM